When is the minority not right. 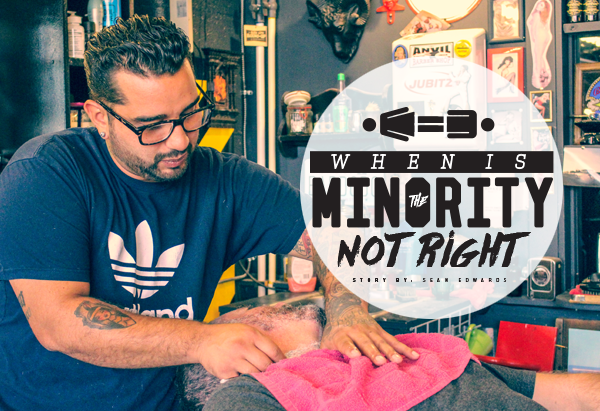 I write this article with caution, as I don’t want to offend anyone – particularly the LGBTI community. nevertheless, what I am reporting on is a contentious issue I feel quite strongly about and raises some legitimate concerns – that being when minority groups champion their causes at the expense of others’ livelihoods and to the detriment of barber culture.

This commentary stems from a recent trip to the USA, when I called into my local barber in Milwaukie, Portland. This shop is called Anvil Barbers, and we have done a review in past issues of this gem in the Oregon heartland. This business is a museum of old school barbershop memorabilia – a nod to skilled artisans in a bygone era – run by the two nicest guys on the planet, Marcus and Ryan.

This day I called in they were unusually quiet and reserved – not the usual loud and boisterous mob I’ve come to know. I sat up in the chair and threw some small talk about, until I said to them, quizzing, “Hey guys, what’s up with you all?”

Marcus proceeded to tell me a story about two ladies who recently came into the shop, one of whom asked for an undercut. Marcus respectfully explained he was a male-only barber and does not cut women’s hair, as he is not trained as a hairdresser. The ladies looked somewhat bewildered at his response and did not say a lot, leaving the shop without any controversy.

The lads thought nothing more of the exchange, as it has happened many times in the past, when they have politely turned away ladies without confrontation or concern.

The ambience of Anvil Barbers has a strong male-orientated vibe, what with its old-school relics and other blokey stuff adorning the walls; despite this, concerns about discrimination or diversity have never been flagged. In fact, I have often noticed mothers accompanying their sons getting a cut on my previous visits.

That night the boys’ Facebook and Instagram accounts were inundated with hate mail from the LGBTI community following the ladies airing the incident on Yelp and social media. In an unprecedented response, the guys received hundreds of comments accusing them of being homophobic, declaring that they did not have the right to turn away lesbians from their barbershop.

First and foremost, Marcus explained to me was that the ladies’ sexual orientation simply did not come into the equation. “This is Portland, Oregon – you can’t put anyone in a category in this city, as everyone’s an individual and if I did that, we would never survive,” he said.

The boys did what they thought was right and started to defend themselves on the various social media platforms, which only escalated the situation, as arson and death threats ensued.

What really hurt these guys was having their identities thrust into the limelight and having their beliefs publicly questioned. Both are staunchly against the vilification or discrimination of any minorities, or indeed anyone. Both boys are married, and Marcus has two daughters, so naturally they are in support of gender equality. Likewise, they have many gay friends and are respectful of sexual identity and choice. Marcus also revealed that because of his heritage he had been discriminated against throughout his childhood, the volatile nature of which he had not fully recovered from, and he can sympathise with the plight of minorities.

The fiasco continued to gain momentum, as the national media got wind of the story, with the New York Times making enquiries about the encounter, then the local press jumping on board as well. This directly resulted in a downturn in business and a dive in revenue, particularly the after-school trade, as mothers shunned the established.

In his southern drawl, Ryan uses the analogy that “you can’t buy chicken from a bakery”. Barbering has its roots in an age-old tradition that celebrates men’s culture, offering gents a place of connectivity and community. Beyond the razor and scissors, the men’s-only barber is one of the few private spaces left where men can bond and be open with their feelings, which is at the core of this great industry. I see this all over the world and truly believe there is cause to protect this sacred space. Indeed, there are other businesses that operate on a single gender basis, such as women’s only gyms and health clubs who are likewise objectively justified in this business decision.

Ultimately, the boys decided they would go about things as normal and stopped responding to hate mail, continuing to focus on giving customers their regular excellent treatment. Slowly but surely, business returned to normal and the keyboard warriors lost interest, with Anvil Barbers winning their credibility back within the community.

In due course the two ladies apologised to the boys for having ignited the controversy. Although grateful for their remorse, the boys only wish they had been more honest and transparent at the outset, before taking the matter online. This story is not about running a particular group down, but rather serves as a call for a greater awareness of our actions and their consequences on others. An ode to consideration and above all – respect. Just as the push for diversity is tied to respect, the courtesy of respect should extend to all – and in this case, respect for business decisions whose foundation might not be abundantly clear or understood.