WHAT IS MEMPHIS DESIGN? 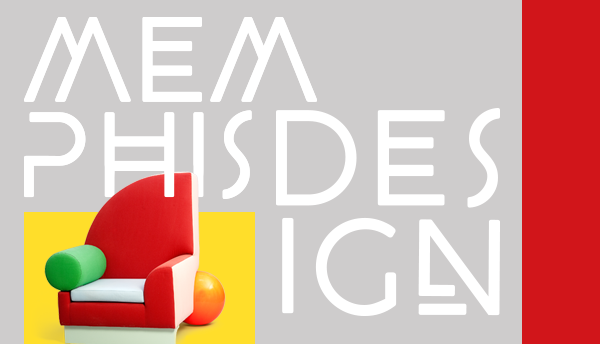 Kathryn Wilson has to keep ahead of the game as a graphic designer for Australian powerhouse record label Dew Process, home to internationals Dropkick Murphys and London Grammar as well as locals including Jebediah and Tkay Maidza. She’s a graduate of Sydney University and Enmore Tafe’s advanced design program, so our interest was piqued at her obvious excitement when asked what’s generating the most buzz in the design world right now.

Box Jellyfish!
Does the sight of a sphere next to (but not touching) a triangular prism cause your body to freeze with anxiety? Do you experience nausea at the sight of clashing primary colours with black and white geometric patterns? Do you have a sense of impending doom whenever someone mentions the 80s? If you answered yes to any of the above questions you may have been bitten by a box jelly fish and require immediate treatment, or you have inadvertently encountered the resurgence of the Memphis Design aesthetic.

What is Memphis Design?
It’s most easily described as looking like the set of a Saturday morning children’s television program. Historically, however, it was the result of a meeting held in Milan by industrial designer Ettore Sottass in 1981. Sottass gathered together a dozen designers and over some drinks, they decided to create an art movement that converged the geometry of Art Deco with the colours of Pop Art and in doing so, to stick it to the functional minimalism of Modern Design.

‘Sup with the name?
The movement’s name had nothing to do with Elvis or the Ancient Egyptians – the designers just happened to be listening to Bob Dylan’s ‘Stuck Inside of Memphis With The Memphis Blues Again’ and Memphis Design was born.

How’d it go?
The response to the movement’s designs were mixed. While they were embraced by youth and popular culture they were written off by design snobs as being “a shotgun wedding between Bauhaus and Fisher Price”. Sadly, an aesthetic as colourful and chaotic as that of Memphis Design could not survive the oversized plaid t-shirts and black lipstick of the 90s and only a decade later, the shapes and squiggles were laid to rest. That is, until now.

The Return!
Next in the long list of anachronistic design trends of the past decade, it is finally Memphis Design’s turn and no sector of the design world is safe from its squiggly grip. However, before you start rummaging through your medical supplies box for a valium to wait out this trend, take a moment to appreciate that circular, light grey, marble chopping board you were Instagramming yesterday. Think about that copper cylindrical lamp shade you were eyeing off last week. You might not know it but you are already under the influence of nouveau Memphis Design. The aesthetic has been pared back, elements have been separated and neons and pastels have replaced primary colours. The squiggly and geometric patterns have become an illustrator’s paradigm for symbolising shadows, textures and architecture. Where Sottass and his co-founders’ main aim was to disrupt design trends, today’s proponents of Memphis Design are seeking to reinterpret their designs into something more suave palatable. So if you find yourself feeling repulsed by the return of the 80s aesthetic, remember the original Memphis aesthetic embodied experimentation, irreverence, non-conformism and freedom. These are all concepts essential to the progression and development of society – unlike the box jelly fish which contributes nothing and yet is still allowed to exist.