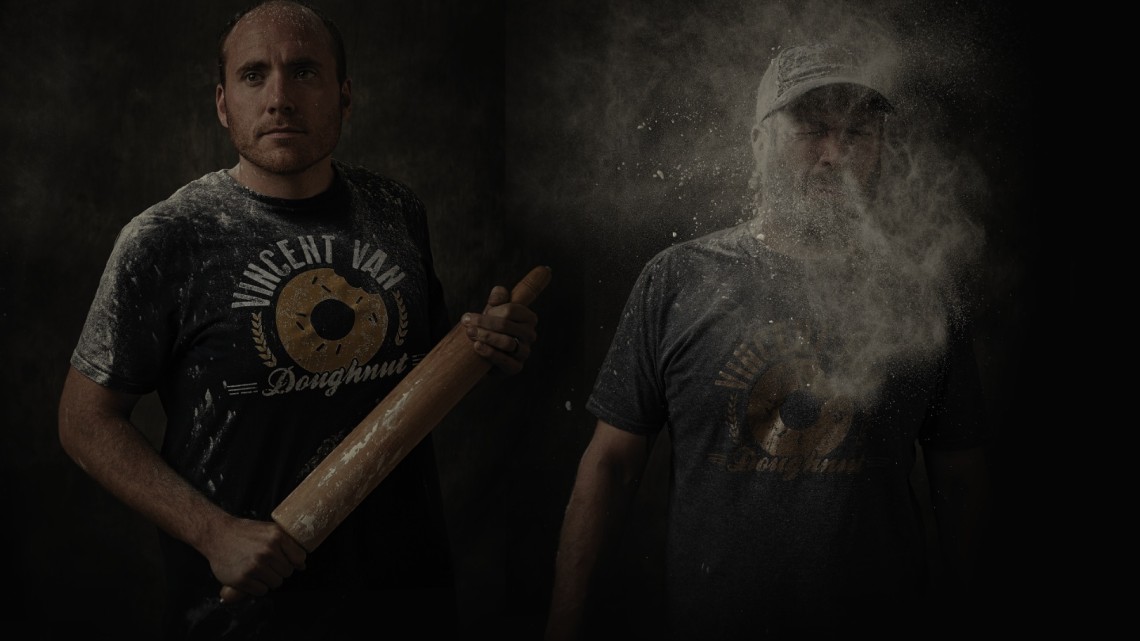 A CONCEPT THOUGHT OF BY 24 YEAR RESTAURANT VETERAN VINCENT BRIAN MARSDEN, WHILE VISITING BERLIN WITH HIS WIFE BRANDIE IN 2010, HAS GROWN INTO VINCENT VAN DOUGHNUT. WITH BROTHER-IN-LAW WILL SAULSBERY ON BOARD, THE TWO HAVE BROUGHT ST. LOUIS NOT ONLY THEIR FIRST DOUGHNUT TRUCK, BUT NOW, THE ONLY FROM SCRATCH DOUGHNUT SHOP WITH SCRATCH DOUGH, FILLINGS, GLAZES, AND TOPPINGS.  EVERYDAY THEY ARE BUSY MAKING THE COOKING CHANNEL AWARD-WINING DOUGHNUTS, WHILE VINCENT’S SON, VINCENT VAN, IS BUSY TASTING EVERY BATCH.

I  have been in the food industry for 24 years now, starting at 15 years old with the workers permit, cutting the tops off of strawberries at a local restaurant here in St. Louis. Since then I have done everything including fine dining, corporate, and owning my own restaurant.

I came up with the concept when my wife and I were visiting Berlin in 2010. So I purchased a small stand mixer and a 2.7l fryer and began messing around in our kitchen at home. I worked for a couple years trying to perfect the recipe and then finally ditched it and have been tweaking the one that I use now. I think I got it almost perfect!

Right after opening the food truck, Clyde, in 2013 with my brother-in-law Will Saulsbery, I was invited to go to Toronto to compete in the donut showdown on the cooking channel. I won the first episode of the second season and since then things really started taking off.

Just a month ago on March 14 we opened our first brick-and-mortar store in Clayton Missouri. Since then, we have been selling out almost daily and have needed to ramp up production to meet demands.

What sets Vincent Van Doughnut apart from every other donut shop in St. Louis, is that I make everything from scratch. From the dough, to the curds/Jellies/fillings, to the glazes, everything that we can do from scratch, is from scratch.

We get so many accolades and have had such nice feedback from everyone in St. Louis so far that it has been overwhelming! Plans for the future as of now are to perfect this first store, continue having the truck go out to people at their places of business, birthday parties, weddings, festivals, and strive towards opening more locations for storefronts. Right now, we’re just trying to keep up.