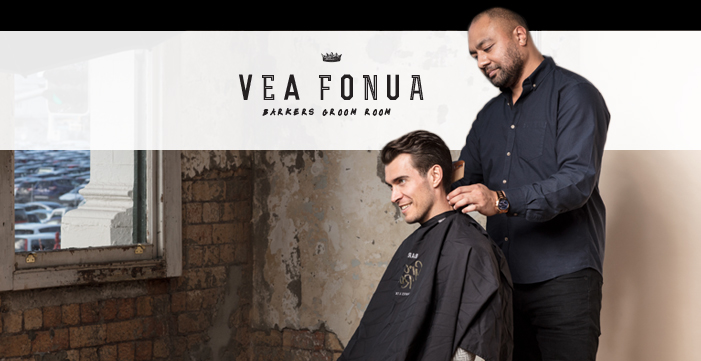 Whenever you see someone on a stage, or winning a competition, or succeeding at a certain level, you wonder how they got there. It’s always been fascinating to me to learn about how people got started, how they found themselves on a certain journey, and dig a little bit more into why they are where they’re at now.

My partner, Vea Fonua, is a barber and stylist, the national manager of the Barkers Groom Room shops in New Zealand, and recently the winner of the Cutthroat Journal Barber Wars at the Hair Expo in Sydney. At the expo we got talking to a couple people about where he got started, and Cutthroat asked us to write about it. Since I was around for most of that journey, and he’s busy cutting hair and stuff, the task fell to me.

Vea’s been cutting since he was young, but more in a backyard/garage kind of setting. He’s Tongan, and traditionally there was always someone in the family who could cut, so he learned young and was responsible for cutting whoever needed it. In his early twenties he worked in a shop in Mt Eden under owner Pule…, and he always says this is where he learned most of the foundation of his skills. He was never formally trained, I think he lasted two weeks in barber school.

When I met him in Dunedin in 2012 he wasn’t focused on barbering. He was in med school, working toward a long time dream of his to be a doctor. He was cutting part time in the only shop in town that catered to a student demographic. A year later, he was having a tough time personally, school wasn’t working out, and the shop he had been working at was closed. He was constantly getting texts from people to cut their hair, so they would come over to his flat and he would cut there. We started talking about the possibility of opening his own shop. There was nothing but hairdressers and old school barbers in Dunedin at the time, he didn’t have much else going on and was looking for something to inspire him, and he was good at it (apparently, I knew nothing about barbering).

We didn’t have much (or any) capital, and neither of us had ever run a business, but we got together with two of the guys he used to cut with, he ran the idea by them, and a day later we were out looking at spaces to lease. The guys started the shop with less than $2000, it was an old soap shop painted baby pink and smelling like flowers, so they spent day and night in there painting and getting it ready to open. It was a true example of, “start where you’re at, with what you have”.  Second-hand everything, decorations from salvation army, supplies from the $2 shop, but they made it work and we learned a lot running that place for a year.

A few years later we tried to do the same thing in Auckland, but partnered with a friend of Vea’s who was a talented tattoo artist. This was a bigger risk as Auckland is a big city that already has plenty of quality shops established. It was fun to throw ourselves into the project again, but ultimately it didn’t work out. A few months after opening Vea made the decision to walk away from the shop and find work elsewhere. He ended up working for a shop owner who had a store in the Viaduct and one in the Barkers retail space in High street. After 8 months or so of working there, they went through re-structuring and Barkers took ownership of their in-store Groom Rooms, and hired Vea as the manager. It was the beginning of a huge year and a half of growth for him.

The journey with Barkers has been both amazing and extremely challenging for Vea. They’ve gone from two shops with a total of 5 barbers to what will be 6 shops this year and more than 10 employees in the High Street store alone. He’s had the strength of a big company behind him, which has allowed him to learn so much about how a large corporation, but in large part he’s been solely responsible for the Groom Room side. It’s a far cry from having to paint our own walls and count dollars to get enough razors and neckstrips for the next week of work, but it still comes with its own challenges. In the time he’s been with Barkers, he’s not only improved as a barber, but he’s become a better teacher, learned to be a manager, and gained so much knowledge about the business, marketing, and creative sides of the industry. He’s really come into his own over the last year and he loves being a part of this industry and watching it grow around the world.

Vea has an ego about his own performance, in that he wants to do his best all the time and he constantly wants to get better at his craft and learn new things, but he’s never had an ego about being better than anybody else. He’s always the first one to say, “if you like your barber/hairstylist now, STAY with them”, and I’ve never heard him speak badly about anyone else in the industry, ever. It’s something I’ve always admired about him and tried to emulate in my own life, he just doesn’t waste any energy speaking badly about people. When a client comes to him to fix a bad cut from another shop, he just explains how he’s going to fix it and what they can ask for in a new shop to get the look they want.

There’s only so much differentiation in how talented you need to be to execute a good “short back and sides”, but how you make that person feel will make a difference. We heard this echoed everywhere from leaders in the industry at Hair Expo, and it’s always what Vea has believed and what I think has set him apart. He remembers everyone he cuts and he can mention something right away to make them comfortable, like asking about their kids or their job. That’s why he’s successful, and I guess he’s decent at cutting hair too.

The Hair Expo in Sydney this year was a huge opportunity. Competing here was a whole new level. It’s easy to stay in the comfort of your own shop, with your own clientele, and feel content that you’re doing a good job, but it really challenges your ego and your boundaries to bare yourself to an audience and a team of judges on a big stage. We were shocked by how big a production it was, three days long, all the big names that were going to be there, all the opportunities to learn. Being in New Zealand is great but it’s a small pond, and most of the guys in the industry there are so busy they rarely get any time to catch up with each other.

One of the best parts about all the talent at the expo, whether it was the people educating, competing, or just there to learn, was the chance to chat with all of them and really see that there are so many ways to be a part of the industry. There’s never going to be a  shortage of men and women that want a great haircut, so the opportunities are literally endless and there’s room for everyone to succeed. Whether you want to compete, run your own shop, travel, educate, develop products, there are so many ways to bring individual style to this industry.

Hanging out with such creative, driven, and talented people sparked some new inspiration for Vea as well. He’s passionate about helping other men and women succeed in this industry and looking to get into educating more, so we’re working on a few projects together now to make that happen.

Winning the competition was a great achievement, especially because the other competitors were so talented and the challenge was the toughest he has faced by far, but it was just a small part of what he’ll take away from that weekend. Competing was his ticket to be there, but that experience was valuable far beyond any prize could have been. To think back to where he was five years ago, struggling to figure out what to do with his life and questioning whether being a barber was right for him, seeing him get to demonstrate his skills on that platform and amongst so many people he admires was a proud moment to witness.

So, if you’re wondering how that guy got on stage, or got so successful, or achieved that goal?

He just got started, he put himself out there, and he kept learning, through every success and failure.