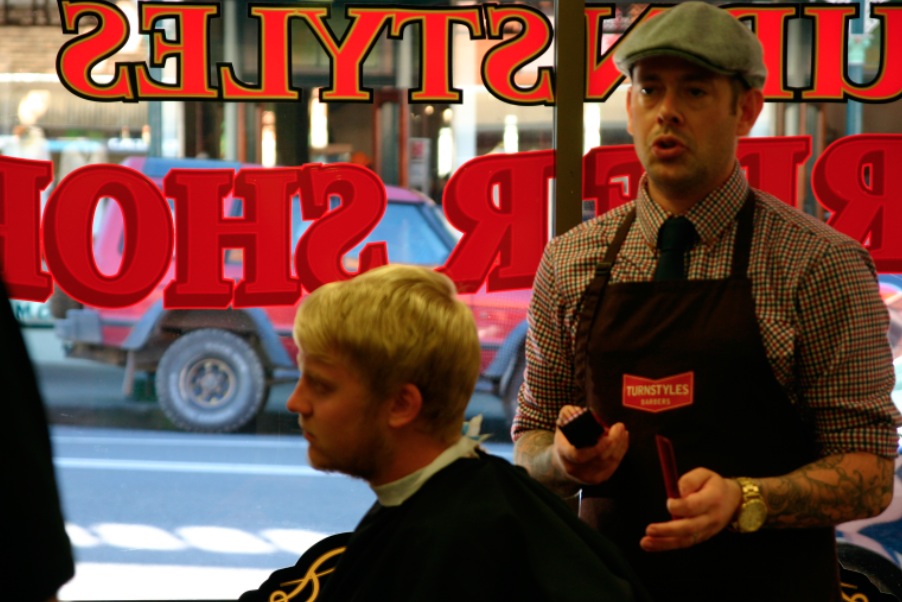 Dedicated barber Tim Dodd started Turnstyle Barbers in the UK 25 years ago. He established himself in 2007 in Australia and now has two stores on the Mid North Coast of NSW. One in Coffs Harbour and one in Bellingen. The stores are very cool with the retro black and white checked flooring, sporting racing red barbers chairs. Tim named the barbershops ‘sports barbers’ which obviously has something to do with his love of sports. This is a saying flagged on his website about his barbering and his sports affirmation:

Tim has a cool bunch working with him in the two stores. He spreads his time between both. He is a natural teacher and likes passing on his skills to his team, offering them the traditional barbering techniques.

The Bellingen store is located in the heart of the busy township, which is famous for its alternate lifestyle. It attracts many tourists all year round and boasts great cafes and craft shops.

I was totally blown away with Tim’s passion for his work when I visited him in his Bellingen store. I once lived in the town and worked straight over the road from Turnstyles. I know first hand the magic that happens there amongst the eclectic town folk. Turnstyles was a perfect fit with Tim’s personality, which  makes him stand out in this space. The barbershop had a great range of self-branded street wear and I made sure I didn’t leave without securing a cool T-shirt. He has a good range of hair products and caters to all ages in this retail area.

Tim has taken the initiative to bring over famous LA barber ‘The Real Trippy’ to do some workshops in September in Coffs harbor, and  has already filled many of the ticketed spots. Tim himself will also be presenting information about the direction of the barbering phenomonon worldwide.

The Cutthroat Journal will be taking part in the Coffs Harbour barbering workshops in September and will report on it for the next edition. It’s guys like Tim that are going to make this revolution of barbering stronger by making the changes that are needed and by inspiring and training barbers to keep traditions alive.