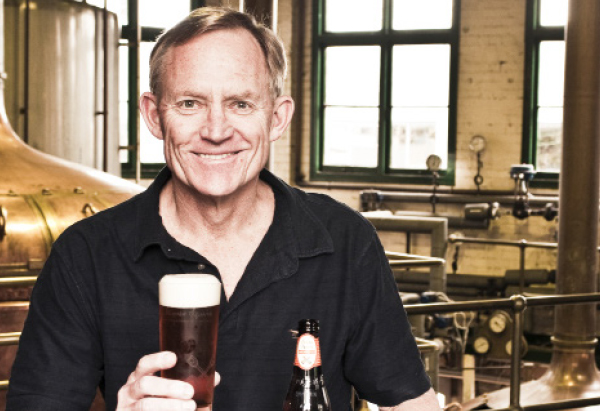 Chuck you have been involved in making changes to the way Australian drink beer when did you think Australians will  start drinking beer for taste not quantity?

It is happening already. One of the real drivers has been the popularity of the TV cooking and life-style shows.  People are interested in flavour and in ingredients and recipes. The spin off to the beer drinking is that people are now tasting, rather than just drinking beer, and they are interested in how beers are brewed. Major changes have been noticed, especially in the last five years.

How much is the craft, artisan, speciality style branding impacting on the way men shop today when buying a beer like James Squire?
Men shop for beers based on flavour, presentation and refreshment. Rather than just slamming down a dozen cold bland (but refreshing) lagers, many are now also interested in flavour deliverance. The larger older craft brands, such as Squires, can be counted on to deliver consistent quality, and this is important to the connoisseurs. They are paying a bit more and they wish that assurance of quality.

How many years has it taken to get the James Squire brand to where it is today as one of the most recognisable craft beers on the Market?

We introduced James Squire Original Amber Ale to the market in 1999.  This robust deep amber coloured English-style ale with a rich creamy head was distinctive as a tap beer.  We now have seven beers in the brand family that we brewed year round, in addition to a number of seasonal and Mad Brewers releases each year.  Although James Squire was recognised as Australia’s first brewer in 1793, his first brewery at Kissing Point closed down in 1832.  We “rebirthed” his brews at the original Hahn Brewery in Camperdown and renamed the brewery as the Malt Shovel Brewery in his honour.

Tell us a little more about the new beer you have just released in the James Squire line up The Hop Thief
The Squire Hop Thief Ale was introduced over seven years ago, using a special selection of hops that I had brought back from the USA. It was initially established as a seasonal release using special hops from all over the world.  Our brewers would determine which hops were really special and then brew an ale with them.  Last year we offered Hop Thief Five to the market as an American Pale Ale style and only on tap.  In a couple months, Hop Thief Six will be introduced both in bottles and kegs.  We have decided, due to its popularity, Hop Thief will continue as a year around brew, with the hops changing each year.

I hear your a Keen Skier tell us about your next adventure on the slopes?
I head off to Colorado this week for a couple weeks of skiing at Vail and Beaver Creek.   Then, in June – August, there are always a few trips down to Perisher and Thredbo, especially as we also operate the Kosciuszko Brewery at the Banjo Paterson Inn in Jindabyne.

Who is your Barber Chuck and do you let them control the styling?
I have been going to a guy in Redfern who operates a shop just around the corner from Sydney University where I try to swim and train early most mornings.  It has been pretty much the same style for many years, although the hair seems to be getting thinner.  Nothing fancy, just #5 on the sides and a trim on the top.

We find the new age man that cares about self grooming also cares about what goes in to their body is low carb and low alcohol beers still popular and can you get tasty options.
Proper diet, a disciplined exercise program and moderation in everything are all very important in the maintenance of a viable body, especially as it gets older.  Hahn Super Dry (of course, I had to recommend that one) is one of the best tasting carbohydrate-reduced beers on the market and is a very refreshing liquid.  The same is true also for Hahn Premium Light.  One can drink and enjoy large volumes of either one.  However, most of the calories from beer come from the alcohol level, not from the carbs.  Consequently, I feel one is better off enjoying a couple richer craft beers, such as Squire or Kosciuszko, and feeling satisfied.  The other option is drinking large volumes of the refreshing easy drinking, less filling, lagers.

Squires now has a lower alcohol brew in Constable Copper Ale; it is an English-style ordinary bitter with extra dry-hopping and a 3.4% ABV alcohol level. It delivers a magnificent hop character at a middle alcohol level.

Whats next for craft brewing in Australia I notice every town now has a small Brew house springing up is this trend going to stay?
Beer drinker is the real winner; choice is available to everyone.  Brew pubs producing a range of different beers and also providing excellent foods to match those beers.  Going to the pub is now a real beer adventure and experience. Craft beer volume has doubled in the last five years; we now have almost 200 breweries across Australia with many producing some great beers.

What got you into your love for beer?
I love flavour, and beer delivers that. It is a natural product produced from natural ingredients without any additives. It is refreshing and it creates such a social atmosphere for everyone to enjoy.

If you were a beer what would you be?  My favourite would have to be the James Squire Four ‘Wives’ Pilsener. A close second is the Hahn Premium Pilsener.