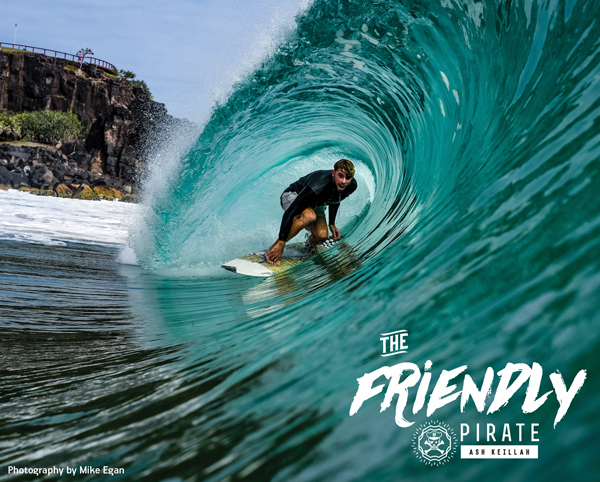 It’s easy these days to make your own version of the story as you scroll through curated pictures of people’s lives, with their sunkissed skin and carefree vibe, but every now and again you get a little bit of extra energy that makes you want to dig a little deeper. That’s when we learned more about Ash Keillah, ‘the friendly pirate’. We took that extra step, went to 2nd base and clicked on the link. We found not just ‘a good lookin’ bloke with a hard 10 chicka’ (his words not ours), we found a man with a story. His story encompasses a certain type of inspiration and motivation that we thought could be of benefit to our Cutthroat readers; so we went to 3rd base and got in contact.

Ash is not taking the hipster movement to the next level by donning an eye patch, it is a representation of his bravery.  What started out as a night on the town in Surfers Paradise, ended up being a life altering moment because of ‘a coupla bozo roid heads fighting’. Knowing one of the guys, Ash tried to break it up when the other one snapped and tried to glass his friend… it  got him instead.

This left Ash in hospital with 7% vision in his left eye. With life ambitions of going pro with his surfing, he could tell his family and friends thought his surfing dream was over. What would have been a devastating blow to most people and a valid excuse to dwell in self pity, Ash’s attitude demanded he take it as an extra challenge and be more positive than ever.

“I was joking in hospital, trying to flirt with my nurse in front of my friends and fam, I realised how upset everyone else was and wanted to alleviate that sadness for them. I guess that’s what else helped with the positive outlook, I don’t think I was just doing it for me”.

Ash spent a stint in hospital and had an operation to stitch his eye back together, had 38 stitches in his face and with the true positive approach that ‘chicks dig scars’, headed home with hopes of regaining the majority of his sight. A disappointing result and another operation months later, his vision was still not 100%. “I could see a tiny bit, but it was black and white, but the eyeball killer for me was when I tried to finally surf and my eye flared up like a cherry tomato. I went straight back to the docs (obviously surfing was the most important haha) and asked them what to do?” It was at this point he had the option to continue with more operations and see what would happen, or just take the eye out and be back in the water within 3 months, pain free. As a committed surfer he took it out, and hasn’t looked back (no pun intended).

If this ordeal wasn’t enough to knock the mental strength out of him, it was only a year prior to this he dealt with his mother committing suicide. When he came out with his movie ‘The Friendly Pirate’ 2 years ago, he realised he had recounted his mother committing suicide and losing his eye in the wrong order. This really brought home the magnitude of what was one messy and chaotic period of about 3 years.

We won’t lie; we initially found Ash interesting because he ‘looked like a pirate’, but with further digging found his upbeat nature and perspective to have a little bit of  that extra ‘sumthin sumthin’, that we wanted to share with others. Ash is evidence that the power of attitude can get you through the shittiest times and still spit you out the other end, able to absolutely love life. He must confess, his mindset is also down to the people around him. His ‘chick’ Stacey Allen has been his definite rock, saying he ‘got super lucky with her’, she’s got his back 100% and always brings the good energy wherever they are. “She’s the most amazing chicka ever, super motivational herself and always got a big smile on her mug.” We are pretty sure that’s definitive proof that you attract what you put out.

We thank Ash for being a legend and asked from his perspective, 3 pieces of advice he would give to his fellow mankind:

1.  Find motivation your own way, it might not be surfing but I think anything physical you can put goals into is huge!

2. Drop deadweight friends (you can’t save everyone) especially if they can’t save themselves.

3. You’re stronger than you think and you don’t need anything more than your mind to succeed.