THE SCUMBAGS TOUR DOWN UNDER 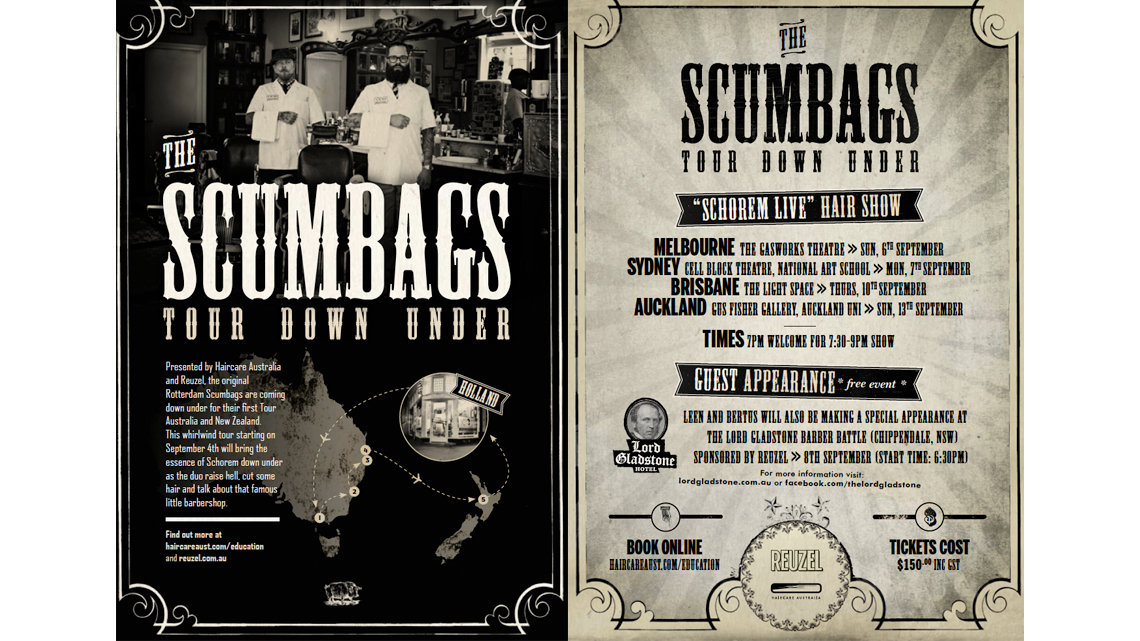 The original Rotterdam scumbags, Leen and Bertus AKA Schorem Barbers are coming down under for their first Australian and New Zealand Tour.

Presented by Haircare Australia and Reuzel, from September 4 the notorious duo will raise hell, cut hair and talk about their famous little barbershop. A whirlwind series of events kicks off in Melbourne before heading to Sydney and Brisbane and wrapping in Auckland.

Whether you’re in the trade or simply appreciate the finer side of barbering, The Scumbags Tour Down Under provides plenty of opportunity to absorb the bad boy barber experience with Schorem Live Hair Shows, The Lord Gladstone Barber Battle presented by Reuzel, and a series of guest appearances in each city.

Leen and Bertus: “This is what we do, we don’t care about fashion or trends. We love the rock ‘n’ roll subcultures, and that’s why we are so much into the Pomps and Quiffs. Barbering should always be about style and perfecting haircuts that have proven themselves over time.”

– Interviews available with Leen and Bertus

ABOUT LEEN AND BERTUS:

Schorem is an old school men-only barbershop in the heart of the working class city of Rotterdam in Holland. Its owners, Leen and Bertus, have been cutting hair since they were 14 years old. The shop specialises in traditional, classic and signature haircuts, as well as, hot towel straight razor shaves. Schorem is trying to preserve a vanishing craft from a lost era of time.

Since it’s opening, Schorem has been frequented by greasers, rockers, bikers, psychobilly’s, ink slingers, skateboarder, kids, ruffians and other fine gentleman scumbags from every echelon of society.

Watch the official Schorem Documentary to find out more about Leen and Bertus and Haarsnijder en Barbier:

Reuzel is the Dutch word for lard and is a wink to the past when pomades were made from animal fats and made fragrant with apples. The word pomade is derived from the French word pomme, meaning Apple.

With more than fifty years of barbering and grooming experience, Leen and Bertus formulated pomades worthy of their exacting standards. As old school barbers, they dug deep into the history of pomades to formulate what they believe are the world’s finest; Reuzel.

Reuzel grease in the green can is a beeswax based, medium hold pomade. It’s as sticky as honey and will pomp up or slick down every classic or signature barbershop haircut. The traditional pomme fragrance has been spiced up with a little peppermint.

Reuzel pomade in the red can is a water based, high shine pomade with a subtle scent of cola. Reuzel pomade rinses out easily but holds hair like super glue and shines like a fresh coat of paint on your favourite vintage car.