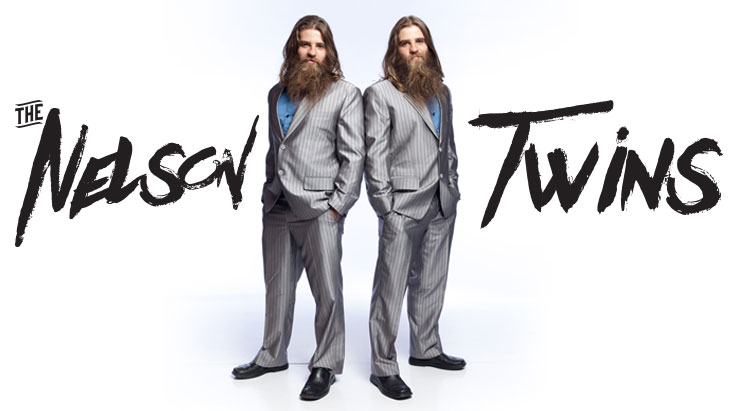 The Nelson Twins are known worldwide for bringing the laughs with their bearded double act.  They first showed up on Australia’s Got Talent in 2012, a strategy they admitted at the time was used to secure spots as extras on Packed to the Rafters. While they didn’t get to stand near Rebecca Gibney at lunch, the duo have achieved fame since through their work in schools and appearances in advertisements. We love ’em because they’re bloody hilarious and have stupidly lush beards.

First things first, why did you two grow beards?

Justin: We did it to hide our neck, our rugby coach doesn’t allow them.

But which brother has the better beard and why?

Justin: That’s a good question, I think we’ll have to measure them now. Damn, looks like you win, Chris.

Chris: Definitely me, I can hide more things in mine.

What’s the strongest reaction you’ve had to your facial hair while travelling the world as bearded gents?

Justin: We once made an Albino in Norway so jealous he attacked us with a pair of scissors.

Chris: I had a lady in London stroke my beard and tell me it reminded her of her pet cat. That was a little weird.

What would happen if one twin shaved?

Justin: We wouldn’t be much of an identical twin act if only one of us had a beard, so I guess the other would have to shave to or grow the beard back really fast.

What’s the Nelson Twins’ take on the profession of barbering? Are the two of you ever found happily ensconced in a barbershop?

Justin: It’s a tricky one for us: we certainly have huge respect for the profession, but I can’t see us sitting in the barber’s chair anytime soon.

Chris: Could be dangerous – a barber would make us look handsome and respectable, not a chance.

Do you two use beard and/or hair products? If so, what’s your preference and why?

Justin: We generally don’t worry about our hair but we have been using a beard product called ‘Barbers Choice’. We love it ‘cause it makes your beard smell good.

Alright gents, let’s be real for a moment: would the two of you accept a triplet? As in, if one turned up and had nowhere else to go, would you house that triplet?
Justin: A triplet would be fantastic, and then I could replace Chris.

Chris: Good luck with that, champ!

What have you learnt over a decade in the comedy game?

Justin: Hopefully we’ve learned to be funny. Or that the pay is really bad.

Chris: I’ve learnt how to fix my brother’s mistakes for 10 years. I am now a proud expert.

Why did the two of you develop an education program for schools? How’s it going?

Justin: We developed the Stand Up And Be Counted program in our last year as school teachers. We’ve always thought that having the confidence to speak in public is a valuable skill so we basically show the kids how we do it. We have a great laugh with the kids along the way.

Chris: The program is going great for me. Not so for Justin. He is finding it tough because all the kids are smarter and funnier than him. He is really wasting his time on this one.

What’s next for you hirsute fellows?

Justin: I’m a dad now, so it’s all kids and comedy.

Chris: I’m in the middle of writing the world’s rudest joke. More updates to come.

The boys reckon it “could be dangerous” to get them into barber’s chairs, so that’s exactly what we’ll be doing in the next issue. There will be trimming and it might even end up slimming them, but not enough to piss off their rugby coach.