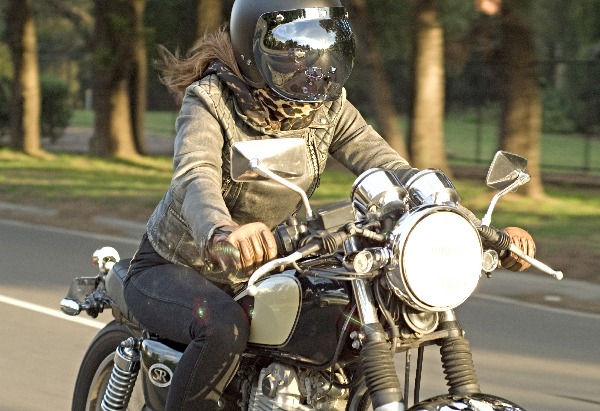 They’ve been led north on this trip along the NSW north coast by Nicolette Skobier who founded the group in late 2014 so women could get their hands dirty working, riding and celebrating moto life. Skobier broke away from the group briefly to give us the lowdown.

Where did your moto journey begin? I was always a bit keen on motorbikes but that keenness never came to fruition, mainly because the people I knew who rode were on sportsbikes which aren’t really my thing. It wasn’t until I met my partner Stephen Broholm – who was building an XS650 bobber at the time – that I got into it, probably because he was the first partner to be supportive and not tell me to jump on the back as a pillion. He was really keen for me to get my licence, which I did and within a month we went on this pretty big roadtrip around NSW visiting all of the ‘big’ tourist attractions. It was terrifying and incredibly beautiful and fun, and it wasn’t until a few hours into the second day that I actually my first breath while riding. The fresh, crisp mountain air… I’ll never forget that moment of thinking “Shit, this is incredible. I love this.”

And that led to formation of the Foxy Fuelers? I kept having conversation with some of the girls involved with Sydney Café Racers and we were all excited about the idea of having a support network. And the conversations kept happening but nothing else did so I thought ‘I’ll do it and run it’. Now it’s exploded into this thing where we hang out and ride, we have little training sessions, we practice together and it’s great to see girls just relax for the first time while riding.  I know the first time I went for a ride all I wanted to do was spew – I could barely concentrate on anything else – so it was really important that I was supported. We’re seeing girls who wouldn’t even hop on the back of a bike before become confident and solid female riders. It’s pretty great.

What’s next for the Foxy Fuelers? A few of the girls are real ski bunnies but I don’t generally organise too many weekend trips in winter. We’ll be heading off once the weather gets warmer to do a few more trips including one called ‘Steel and Stars’ where we’ll go on a ride somewhere like this and camp in the bush, drink beer and tell stories, that kind of thing. Overall, we’re about women supporting each other to get their hands dirty doing customisations themselves – a few of us have done a group workshop in basic maintenance so we’re not relying on others to help us fix our bikes. It’s nice to have that knowledge and more importantly it’s something that can never be taken away.