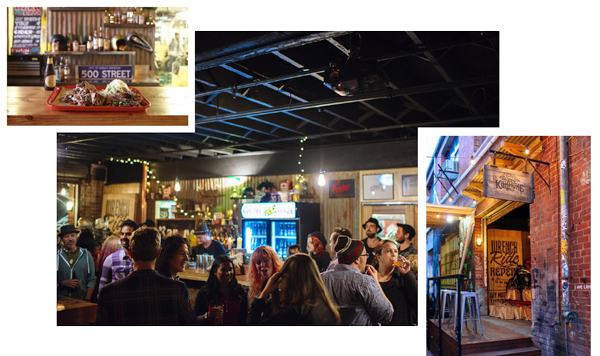 Austin, Texas, is a crazy hedonistic city fuelled by alcohol, smoked meats and southern hospitality. David Barron, founder of Ironbark BBQ travelled to the USA several years ago and discovered this beautiful liberal oasis stuck in an outdated conservative state. It was on this trip that he fell in love with American BBQ and without any consideration for how much it would consume his life, began learning the artisan craft of smoking meat.

Five years later, he opened Ironbark BBQ In 2013 and started selling smoked pulled pork rolls at the Rum Diary on Brunswick Street in Melbourne. Not long after that, he met the guys from The Kustom Kommune (Australia’s first DIY Motorcycle workshop), helping them cater for private events and soon realised that the front space in the workshop was the perfect place for the permanent home of Ironbark BBQ; a unique American BBQ Joint. Opening in early 2015 to sell-out crowds, the goal was simple. Bikes, beers and barbecue. Strip everything back to basics and give people an experience like no other.

They may not be American but their attitude towards barbecue is. It’s all about loving what you do. Its about passion, dedication and commitment to great food. The guys at the Kommune also share these same traits.

Brisket is the yardstick of American BBQ and it is this very fickle hunk of meat, which the guys at Ironbark sought to perfect. It took years of trial and error, successes and countless mistakes until they even come close to what they would call the perfect brisket.

Their principles are simple:
• Get the basics right and everything else will fall into place.
• Use real wood, it helps.
• Use the best quality meat, this also helps.
• Don’t hide behind weird seasonings and dodgy sauces, salt and pepper are all you need.

Their Pitmaster, Nick Tully works through the night spending hour after hour feeding logs into the fires that smoke their grass-fed Black Angus briskets.

They want every person who comes though the doors to become a part of Ironbark BBQ and the Kustom Kommune. Whether you come for one of their American BBQ master classes or you need a quick oil change, Dave, Nick and the Kustom Kommune guys believe the value that makes the space so well is the bringing together of a community where people can have fun, share knowledge and build relationships.