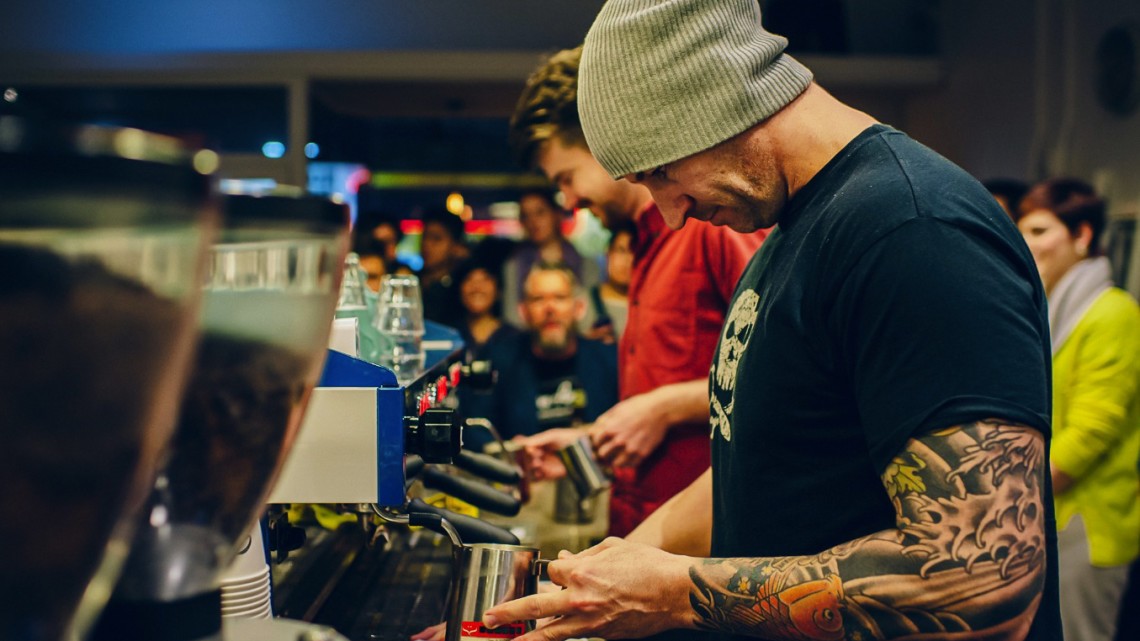 I was 25 when I got my first tattoo. I remember everything about it. Where I was, what the parlour smelt like, and most importantly how cool I felt. Even cooler when I settled on a Celtic butterfly in the small of my back, classy I know.

The thing is, that first tattoo felt like I’d branded myself for the whole world to see and to judge me. I contemplated what would people think, what would my family say and what if people didn’t like it? It was a time in my life when those opinions seemed very relevant.

Fast forward to today, five tattoos and counting and I’m wondering how important these drawings are and how they fit into my life now. There was a time when heads would turn more often than not at the ink brandished man who swaggered past in leather pants and fitted tee. There weren’t many retailers, or frontline hospitality employees who rolled up their sleeves to show off their latest sailor jerry or sugar skull tattoo.

Taking the step to move to Melbourne was a big choice for me, and while I never questioned whether I’d fit in I do remember being nervous on my first job interview. I arrived at a quaint cafe, big nervous smile with a slight consciousness to the writing on my arm. Coming from a more sheltered upbringing and conservative town I always hoped that my visible tattoo wouldn’t be my undoing in signing an employment contract. But really, what bearing does a tattoo have on being able to do a job?

The cafe industry certainly has gained a momentum of change over the past 5 years at least. Not only have new techniques, methods and ideals been introduced but a rebirth of baristas, a new breed so to speak seems to have settled over cafés everywhere. A new and serious profession has come to light and I’m noticing a uniform amongst some of the best. It seems that our role as a baristas is validated by the show of tattoos. Even providing confidence in the job you’ll do. This is not limited to tattoos, but an alternative flair for creative piercings and rough bristly beards. This has prompted me to ask the question, have we become prejudice against who makes our coffee?

I’m sure I’m not alone when I say that coffee changed my life. Even while torturing that poor first jug of milk late one night on a dodgy espresso machine, I knew that this was my calling. If there is one thing that I notice in this caffeinated wonderland, it’s a beautiful thing that I try to never leave home without. It’s called passion. An unmistakeable heartbeat at the very core of what drives so many to master the art of being a barista. This little gem shines in the silky latte art and dialled in perfection of espresso extraction, cultivating an art that enables self expression without ideals of having to fit into some sort of mould. We are creating a profession that is something for everyone, perhaps even going so far as to say that it can morph into anything you like.

We do have a tendency to make assumptions about someone based on our first impression. This first instinct you could call it sets the scene for our expectations of what happens next. Based on experiences, upbringing and society’s influence our internal opinions take shape in creating an impact on our choices. It can be said that what stirs someone on the inside is what attracts them on the outside. As a thought though, think about what happens for you when trying to find a great coffee in unfamiliar surroundings. Looks trendy, good machinery and a couple of hipsters out the front. Upturned milk crates, Edison light globes and perhaps a well placed chemex or cold drip. How many of you glance up to see who the anticipated barista is? Would we think it strange if they were wearing a business suit? Is there a uniform that inspires us to say, yes I’ll order coffee here. Are we eternal optimists when we search for a coffee and purchase it from a corner deli? I had the pleasure of speaking to Nick, owner of Moka Pot cafe in Balwyn Victoria who has been in the business for over 50 years. Propped up with a newspaper in the corner of the busy establishment I catch a smile as I wander over to sit with him. He gives me a slightly puzzled look, “What happened to your hair?” he announces with a knitted brow in my general direction. I badly stifle a laugh and with a twist of my blue locks I mumble something about not being boring or predictable. After being invited into the cosy table space an espresso and piccolo arrive and the conversation flows freely.

‘I studied Accounting when I was young,’ he begins, ‘and once I finished my degree my father asked me what I was going to do. Well I was going to be an accountant of course until my father asked me why was I going to work in a job where I’d only be paid the same amount every week. Be your own boss, I remember him saying, make your own money for your future. So I did.” He sits back in his chair with a shrug of his shoulders and a wave of his hand, ‘56 years later and look what I’ve got.’ I speak to Nick about how much change he’s seen over the years, and how he would have employed and interviewed so many different people. I ask him what influences him during an interview and do tattoos and piercings play a part in hiring.

‘How I grew up is a big part of me now and I carry those same values with me today. As for business I think every owner is creating a place that fits a certain idea for a certain crowd. I usually steer away from outward piercings and tattoos, I have older customers who come in here who are not used to that. Every suburb has their signature, and knowing who we are wanting to serve makes a bearing on what we asked for from our employees.’

‘I interviewed a girl the other day, piercings in her face and assorted tattoos. I was impressed with her experience’ his voice trails off. I didn’t expect him to say what he did next. ‘I told her I’ll call her, and I will, who knows, maybe she could do a much better job than all of us.’

I wanted a broad opinion on this topic so I did what I know how to do best, turn to my facebook family. A wonderful eclectic mix of coffee professionals from all types of businesses who I knew I could honestly ask if tattoos, beards and piercings influence your choice in hiring a barista. I heard people say that the most important thing was passion for your craft, a friendly confident disposition that provides a high quality customer experience with their attitude and ability. We also plan to hit and attract a certain market, every establishment is wanting to accomplish something different. What did strike me from the overwhelming amount of comments was while we cannot conclusively say we are not influenced to some degree by appearance we also view a much bigger picture. To quote one of my friends, ‘That extends well beyond ink and piercings and all the way into the simple things like if they smile, if they hold themselves confidently and if they engage with you as another human being.’ This leads me to believe that we are true to the cup, that if our self expression spills onto our skin it’s just another way of allowing creativity to flourish. It reminds me of one of my favourite quotes.

‘Here’s to the crazy ones. The misfits. The rebels. The troublemakers. The round pegs in square holes. The ones who see things differently….because the people who are crazy enough to think they can change the world, are the ones who do.’ I am left with no doubt in my mind that all anyone wants from a barista is someone who makes every single cup with as much love as they would make their own. Even when they are tired, when the day has been long or the weather too cold. Even when asked for a weak decaf short macchiato with soy. Maybe all we want is a place to call home, and when you wrap your hands around another cup of coffee nothing else matters but how that translates into your cup.

Candy Weiss is a self-confessed coffee addict. Her passion for the craft has spanned over 14 years and has seen her in a variety of different roles. Candy currently resides in Melbourne.