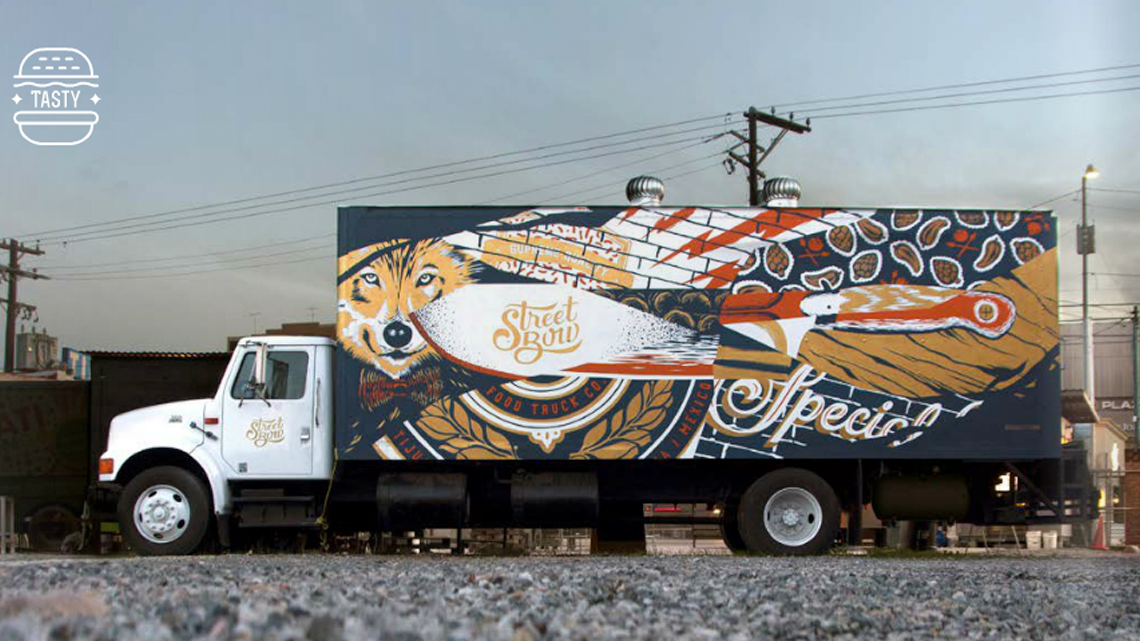 Armando Martin del Campo was Born in San Diego CA and grew up in Tijuana Mexico. After working working the ropes with an array of chefs, it was time to step out on his own. Street bow was born.

Tell us about yourself, your history and the turn of events that made your truck happen? As a little guy, the housekeeper of my house didn’t cook very well. I don’t remember 100%, but my aunts say that I used to call them to ask how to make spaghetti and meatballs. My older sister Jessica discovered my newfound love for cooking and everyday after school, she asked me to cook for her. After a few years I finished high school and was introduced to study culinary arts.

I moved to Monterrey NL, to study for four and a half years in the best culinary school in Mexico; The Culinary Institute of Mexico. After I graduated, I start working with celebrity chef Martin San Roman and busted my ass working 16-18 hour days, 7 days a week. I then studied and graduated from Lenôtre School in Paris, France; recognized for being the creator of the Mexican French cuisine.

I then met my mentor, Italian Chef Mario Cassineri, ex world Corporative chef of Bice Ristorante. He was a devil in the kitchen, but thanks to him I learned a lot. I keptworking and learning off many celebrity chefs at 3 different establishments.

This went on for many years until I felt comfortable enough to open my own business. I had everything I needed: the idea, menu, location, investor, architect, renders, everything. Until my investor fell through.

My partner Saul Jimenez and I decided to make something with our own money, so we start planning a good idea for a food truck.

Tell us about your truck and what kind of food you serve.
Our truck is not completely finished just yet. It’s a 2000 International truck, which used to belong to DHL Company.
I serve modern American food, with a gourmet and unique touch; using fine dining recipes and techniques on a simple food truck.

Tell me how you came to work with ERABOY to design your food truck? It was and adventure working with them, I saw some of their work, so I tracked down the artist. I was amazed to find out it was Guillermo Sariñana, an old family friend from a long time ago.
We made an appointment to meet and after showing us some of his other work, there was no going back, we knew he was the one. I’m still impressed by how he listened to all of our ideas and was able to put his own original spin on it. They were so professional in every sense.

What does the future have planned? We are going to expand and open more food trucks in several parts of the state. I have also had an interesting offer to partner in a a new restaurant and put my touches on it.

We are a Tijuana (Mexico) based multidisciplinary design studio that started a year ago with the idea of doing what we like for a living. The journey hasn’t been as difficult as we expected. We’ve been able to pull this thing off and have a pretty decent amount of work. At the moment we are only a two person team, but are looking forward to building a stronger group that can manage bigger and more challenging projects.

The studio name says a lot about us and our approach toward projects. When I was a kid I used to play baseball and the most common cheer up word was ‘Eraboy!’, a mexicanized pronuncitation of the American ‘That a boy!’. Since Tijuana is located south of the border of San Diego, CA. it’s really common to use expressions like that. Choosing this name had the purpose of helping us to filter our clients, and at some point it has worked. If a client wants to brand their business in a very corporate style, we wouldn’t be that appealing. Narrowing down clientelle can be dangerous, but fortunately we have had the kind of clients we want, those who want to take a risk and have a brand with a bold personality.

The mural on the Street Bow truck was first digitally drawn in photoshop and then projected to the side of the truck. We traced the illustration with pencils and then painted it. The idea of the project was to create a brand influenced by the vibe of the downtown of any big American city, such as New York or LA, full of street art, red brick industrial buildings and Victorian graphics. The wolf was a special request by Armando and was fun to work in.

We used spraycans and oil based paint, which was a pain in the ass because it took soo long to dry and the brushes got all sticky. The biggest challenge was that it was the first time we did something like this, so we had to learn throughout the process and work through weekends to get it finished. We were so busy with we had no other choice.

Next post TIME TO GET INVOLVED PEOPLE AND WIN !!