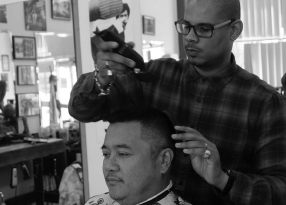 Born and raised in Los Angeles Bruce the Barber has been cutting hair for more than 20years.
Bruce began his barber career at a Barbershop called “Super Star” in Los Angeles, California. Bruce was trained by a female barber called ‘Ayisha Moore’, after a few years working with Ayisha – Bruce moved to assist his brother Goose in opening the first Legends Barbershop.

Bruce moved to Sydney in 2012, and from 2014 expanded the Legends Barbershop Brand opening the first Australian Store in Sydney. Shortly after opening Legends the Barbershop Sydney, Bruce wanted to bring his skills to the forefront and help the public develop an understanding and appreciation of a ‘Barber’. Bruce was offered a once in a lifetime opportunity and began teaching Barbering at Ultimo TAFE. Bruce is looking forward to being a part of evolving trade of Barbering in Australia.