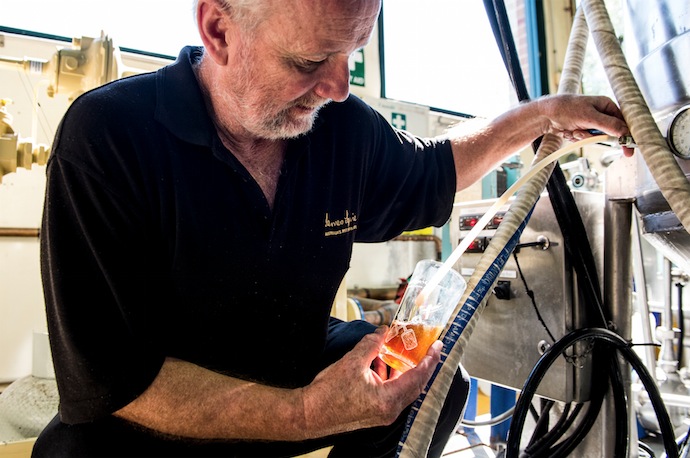 We caught up with Rob Freshwater, senior brewer, to chat about all things beer related

How did you get into the beer world? I developed a love for all things beer through home-brewing.  Without any real expectation of working in the industry, my passion & drive for knowledge about brewing and the science behind it led me to enrol in a post-grad brewing course (’95).  Towards the end of this I was asked if I was interested in applying for a job at what was then The Hahn Brewery (and back in 1990 I won a home-brew comp sponsored by the same).  Well, …I couldn’t believe it, after spending many an all-nighter crafting my latest 20 litre batch someone now actually wanted to pay me to do it (in slightly larger volumes!)  The Hahn Brewery has now morphed into the Malt Shovel Brewery and as yet they, the powers that be, still haven’t reneged on their decision to employ me!

What is you favourite beer at the moment?  My favourite beer, at any moment, is the one in my hand, or more to the point, what is bathing my taste buds!  This any moment beer tends to be more often than not our latest James Squire beer Hop Thief , an American style Pale Ale that’s big on hop flavour with plenty of malt body to balance.

What do you think about the new age beer maker, e.g. many newbies want to be a brewer but how do you get the credibility? These days every time I peruse the offerings at the bar or bottleshop, there’s always some new beer there I haven’t tried or even heard of!  The growth of the craft beer segment in Australia is very prolific at the moment.  Gone are the days where everyone just wanted their favourite…now there is a great fervour to find something new and different.  With the social media being now so prominent and with everyone having their favourite beer App on their smart phone, consumers are onto the ‘newbies’ very quickly. Of course with all this consumer passion for beer, everyone’s now an expert and credibility can come  (and go!) very quickly. The stayers tend to be the ones who are able to make a good consistent quality product, whilst at the same time being able to develop distribution channels and brand recognition.

Life must be getting exciting with you taking on some new labels. There must be big responsibility keeping a brand true to its taste, how do you cope with this task? I think this is pretty much answered in the previous question. It always starts with the beer’s quality and consistency, reputation will eventually follow. Adding more labels or flavours/styles to one’s range will, if done correctly, add depth and draw in more consumers to one’s fold.  Not all beers appeal to all people –some like the refreshing lighter styles while others are chasing flavour & diversity. The key for any is to always have balance. Maintaining consistency in quality is done right throughout the process from the raw ingredients right through to tasting final product.  There’s all sorts of laboratory testing that can be done, but ultimately the brewer’s best quality instrument  is his or her taste buds. Every brew at every stage has to be tasted and signed off.

Rob you are a pretty stylish man, do you like the Barbershop or do you sneak out to the hairdresser for pampering? The real truth? Mmmm, stylish?  Not sure whether anyone has described me as that, certainly I haven’t had any offers to model for Hugo Boss!   But in answer to the question, the hairdresser near the Post Office, read the bills whilst lessening the load on the brain, or is it loading the brain by reading the bills!? Although I’m not sure about the pampering.  These days there is less and less to worry about, that’s the hair, not the bills!

What’s your favourite holiday location and is it connected with beer in someway? Camping. I love getting to out of the way places.  Last year it was the remoteness of the Simpson desert and soon I hope to do The Kimberley.   Is this connected to beer? Well, life, the universe  and everything is always connected to beer!  There’s the solar panels on the roof of the 4WD… to charge the battery… to run the fridge…to chill the beer!

Do you see any resemblance to the real James Squire in anyway? If so tell us? In reference to the beer we make… or my appearance?! Obviously we have a much higher level of engineering and technology these days but beer is still made with essentially the same raw materials as it has been since year dot! And with all the modern variants and quirky beers around it is still based upon the origins of authentic styles that have evolved over the years, a ‘spice-and-herb’ brown ale is still, well, a brown ale!   Our Amber Ale for instance would be indicative of the style of beer in James Squire days albeit a little more refined now. Certainly there was no refrigeration back then so lagers were out of the question.    As for my resemblance to James Squire? I’m sure he was less scruffy and had more hair!

Where is craft beer heading? Will we see any major changes in beer habits? Again similar to other comments above, more and more brands, more and more flavour twists, particularly from the smaller ‘new guys in town’, all being driven by the consumer’s drive for choice and diversity.  Also I foresee more beer shelves in the bottle shop to cope with it all!

What food best accompanies beer apart from nuts? Beer is well known for its refreshment and palate-cleansing character in Australia’s relatively warm climate, but when it comes to sitting down at the dinner table more often than not wine is brought out as the accompanying beverage (a deep rich cabernet with roast beef, etc). The diversification in beer styles and flavours is such that for any food there’s a beer out there, indeed probably many, that will partner with the food very well , maybe even better than wine.   Pilseners go very well with Asian stir-fries, IPAs with spicy curries, malty ales with red meats, and even Porters or fruit beers with desserts.  If you’ve been to beer degustations , you would have heard it all before: complement, contrast and cleanse , the  3 C’s of pairing beer with food.

You have one of the best jobs in the country. If you had your time over what would you do with your life? Start my brewing career earlier!