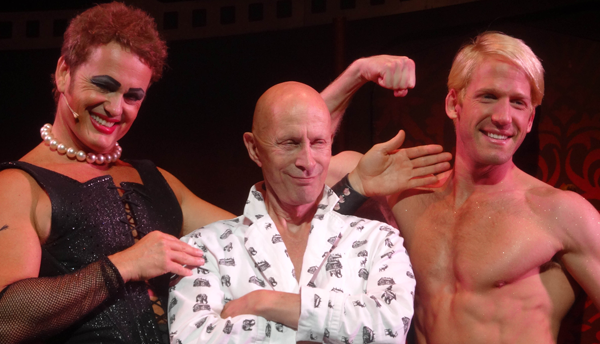 “Stroll through Hamilton’s York St arcade on New Zealand’s north island and you’ll come across a monument to the who barber changed musicals forever.”

Richard O’Brien was born Richard Smith in Cheltenham, in England’s West Country, and emigrated to the Land of the Long White Cloud as a young child to live on a Tauranga sheep farm. In the early 1960s, Hamilton’s Pat Osborne, an old school barber who began his trade more than thirty years earlier and honed it during navy service in World War II, took him on as an apprentice.

The barber
Osborne’s shop was inside York St’s now-gone Embassy Theatre building, and it was always kept ‘ship shape and Bristol Fashion’ as a result of its owner’s service. His young apprentice took advantage of the shop’s location to watch B-grade double features next door.

Inspired by these films, O’Brien used his rare quiet moments to work on his homage to those films’ spirits of fun and transgression. “I wrote a musical I would like to go and see,” he told Britain’s Express newspaper last year. “Did I think it would be as successful as it has been? No, not at all.”

Fame calls
He kept working and completed his apprenticeship, returning to England in 1964 to pursue a career in show business.

He dropped his surname and adopted his mother’s because there was another actor known as ‘Richard Smith’ at the time, met director Jim Sharman (Jesus Christ Superstar) and by 1973 Rocky Horror had begun its unending musical march of success.

O’Brien’s distinctly boney face and frame became even more famous two years later when he and Sharman successfully adapted the musical for film. Sharman directed and cast O’Brien as the freakish handyman Riff Raff. Of course, there were two other relative unknowns who blew up because of the film, by the names of Susan Sarandon and Tim Curry.

O’Brien’s theatrical and film career grew, culminating in the role of a lifetime as the voice of Lawrence Fletcher, the title characters’ father in children’s program Phineas and Ferb.

The statue
The Riff Raff statue itself drew criticism when it was proposed, then protests as it was built and after being unveiled in 2004 it received the backing of NZ television personality Paul Henry. That should have been its death-knell, yet it continues to grow in popularity every year. People flock to take selfies and send messages to those watching online through the live Riff Raff cam.

If it wasn’t so absurb O’Brien might have appreciated the irony when six years after unveiling a statue built in his honour, the NZ government refused to let him move back because he was deemed ‘too old’. But the process played out on appeal, with O’Brien and his third wife Sabrina Graf granted citizenship in late 2011.

It seems unlikely O’Brien will be taking up his first trade again any time soon. He appears to have the theatre bug for life and last year played the part of the narrator in his musical at London’s The Playhouse Theatre, culminating in a celebrity-stacked gala performance on September 17 that was broadcast live to cinemas across Britain and Europe.

O’Brien announced in a Facebook video last month that he would join his local amateur theatrical company’s production of the musical, probably permanently putting to bed any hope of him returning to barbering. But when it comes to ‘The Time Warp’, you just never know…