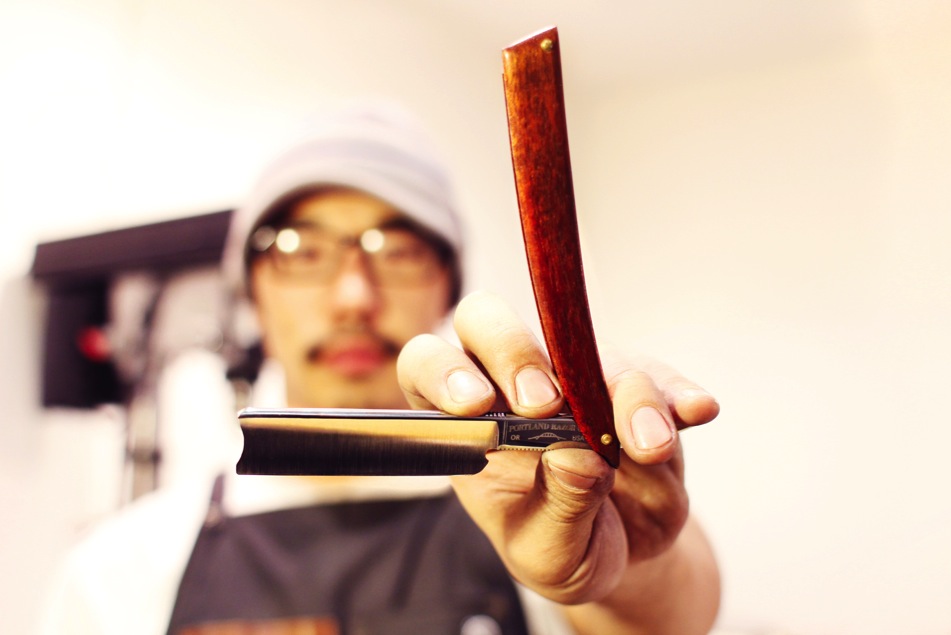 Whilst visiting Portland For The World Beard and Moustache Championships we had some spare time to visit a few places on our radar. We had been communicating on social media with the Portland Razor Company, so we took the opportunity to go and see the art and skill of the cutthroat razor being hand made.

We pulled up in a semi industrial residential area of Portland on the other side of the river from the CBD. The Portland Razor Company was located in a shared arts council workshop, which was the home of a number of artisan businesses. The ‘ADX’, basically a space for all kind of makers, was very cool with lots of creative people floating around between the wood working and design shops. They all housed amazing creations. There was lots of noise and sparks flying in this productive space, which added to the cool vibe of creativity.

We met with Scott, the owner and his girlfriend Alex, who both had moved up from Los Angeles a year earlier. Scott had given up his engineering career to follow his passion for small business and to get back to basics using his hands to create.  Alex gave up a busy career in the television production industry to support Scott in the business. They both chose Portland because of the support the city gave to craftsmen who were prepared to bring back forgotten trades, like building the intricate straight edge razor.

Scott fell in love with the concept of the cutthroat razor and the process of creating this art piece from a block of hardened steel. What was amazing was that the blade is made basically from a block of steel, that is ground down to the finished one-piece blade. We thought it would be forged and computer machined, then just sharpened. The whole process was all hand grinding and honing that took up to forty man hours per blade. Scott also made the wood sheath, or scales, that acted as the handle of the razor, from rare American hardened timbers. The other product they manufactured was the leather razor strop that goes hand in hand for blade alignment of the cutthroat razor. Alex does most of the leather work for these.

Scott passionately answered many of our questions about the process and took us around the workshop, showing up the special tools he designed to do the job more efficiently. You really appreciate the craftsmanship that goes into a single unit, and the cost of this precision tool was way under the physical time cost that goes into every razor. Scott is competing against cheap machine manufactured razors, and it’s not until you see the complex process of manufacturing by hand that you really appreciate paying a bit more for one of these high quality tools.

Scott has been inundated with orders and is still trying to catch up, which is quite hard for a one man band. He has not had the physical time to train an apprentice at this stage but is looking to do so in the future. Scott has a new ‘razor maker helper’, Hunter Lea, a former hobbyist knife maker, who is helping him keep up with the mountain of orders. Scott is a real advocate for hand made in America and with the combination of Portland’s creativity reputation,  it’s a match made in heaven.