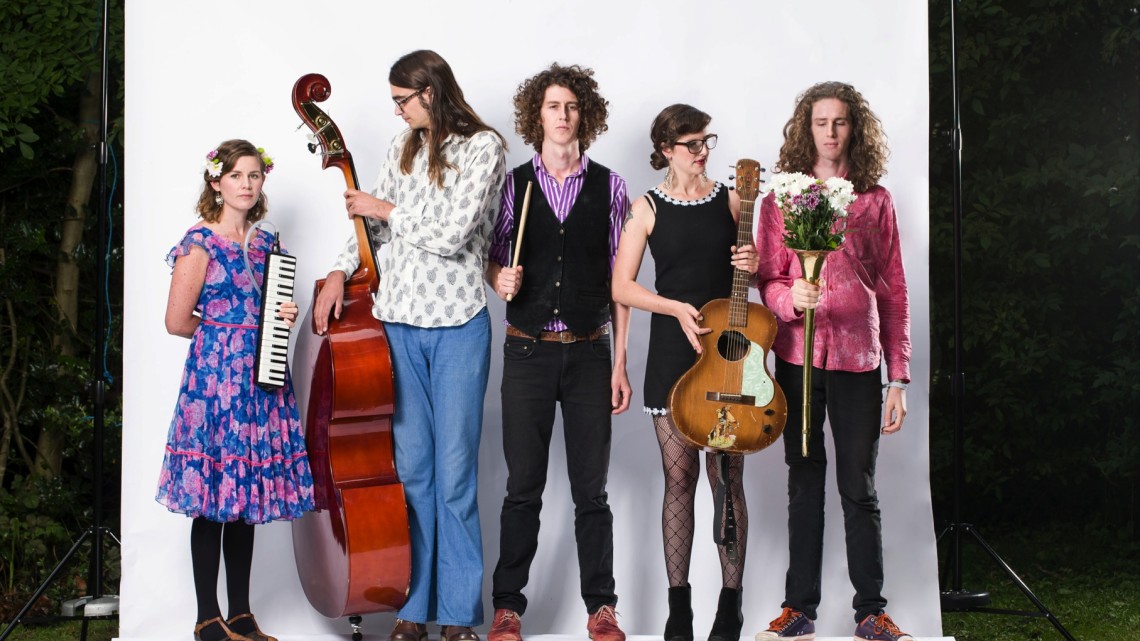 Perch Creek are a band of five energetic multi-instrumentalists and vocalists, four of whom happen to be siblings. This Melbourne-based band play harmony driven roots music with a creative energy and fearless spirit that sparkles with imagination and individuality.

So, four of you are siblings. Did you then grow up listening to and singing music as a family? Tell us a bit about that musical heritage in your family. We grew up in Perch Creek, Northern NSW as sheltered hippie kids who were force-fed early country, blues, jug band, and the Tom Waits discography from infancy! Dad said we’d thank him when we were older. We did, and still do, although our tastes have expanded greatly and lean towards more modern sounds these days.

When did you decide to go from the backyard to taking your music to the people? The real moment was when we decided to move to Melbourne in 2011. From there we all made the decision to give all our energies to the band, touring all over Australia and Europe, securing a booking agent and playing as many gigs as we could.

Did you start mainly doing covers? We started out playing old covers and songs our dad wrote, but now play our own material that we have written collaboratively. Our last album Jumping On the Highwire was written over an eight-day period in a secluded rented beach shack on the Mornington Peninsula, VIC. We are excited about the writing process and the songs for our new album.

So how did James come about being part of the band? James is a careerist. He started off as a fan, then gained acceptance as a groupie, then when I realised he was a good catch, I dropped to one knee and asked him if he’d join the band. He had it planned all along!

How do you go juggling your relationships? Do you spend much time separated when you’re not touring or are you mostly hanging out with each other? We live spread across three houses in the same neighbourhood. Some of us have extravagant social lives, and others don’t, but we do see a fair bit of each other. Whenever we’re not touring there are always rehearsals, writing and meetings to be had, there’s no escaping each other really, luckily we all get along, most of the time!

Is there really a place called Perch Creek? There is. It’s the creek that runs around our family property in Northern NSW, far away from Melbourne, Victoria where we now reside.

Do you actually play jugs? Our brother Lear used to, but not anymore. Jug band music is ancient history to us in a way, which is why we have dropped the “Family Jugband” from our name. It’s nice thinking how much history there is to the band though.

Tell us of your musical influences. We aim to sound like ourselves only, but we draw influence from all the aforementioned roots music we were raised on, plus 60s and 70s stuff like The Band, The Beatles, Pink Floyd, Canned Heat, Cat Stevens, The Animals, etc as well as contemporary acts like My Morning Jacket, The Black Keys, Meg Mac, Lanie Lane, Tame Impala, and heaps of others.

What’s your favourite part of the process, the songwriting, recording or performing? I think song writing is the most rewarding as well as the least stressful. It’s pretty cool when you come up with a great new idea, and the process of collaborative writing mixed with the strong opinions of five band mates often means we will cull and change ideas so much that we only end up with something that everyone is really happy with. Recording and performing are both really fun and occasionally challenging, but in different ways. The excitement of taking the stage and playing a great show where you feel you have connected with the crowd in a meaningful way is always a buzz.

You recently toured Europe and Canada, how were you guys received? The tour was great and we were warmly and enthusiastically received. We played some awesome festivals and venues and are looking forward to touring Canada again this July, playing the infamous Vancouver Folk Festival and Winnipeg Folk Festival along with some other exciting shows!

Describe the ups and the downs of touring and travelling. The ups of touring life are getting to be in so many different parts of the world and to play great shows to new people every night. The list of downs is long, lack of sleep and long road miles being high up there, but we wouldn’t have it any other way. It’s not the most wholesome lifestyle, but it sure is fun, and it makes you appreciate the time you do get at home.

Tell us about your recent songwriting overseas and back home and about the upcoming album resulting from it. We took a week off in the middle of our Europe tour last year to write a bunch of songs in an old stone house in the Welsh countryside. It was incredibly freeing and we wrote so many great songs, which we have been further developing recently. We have just recorded the first single “Mama Sings”, with Greg Walker from Machine Translations and will be launching it across Australia in September (tour dates at perchcreek.com). The album will be released in 2016.

Who’s the biggest show off in the band? The biggest or the best? I’m not gonna mention any names, but when you come to our shows it’s pretty obvious…

Most reserved? That would be James. He has a minor genetic defect in that he lacks the all-important “show off” gene that we Hodgkins’ kids all share.

Messiest? Are you trying to destroy my already volatile relationship with Eileen?

Best cook? Lear is our hospitality pro, he puts in the extra effort to make everything café quality. For overseas tours he is known to pack his 1950s Atomic espresso machine into his suitcase to make sure we are caffeinated at all times with only the best, what a guy! But Christi needs to be mentioned also, as he is the lasagne king, hands down.

Have any of you had formal musical training. I mean, did you go to saw playing lessons? We all had music lessons as kids, but on the more conventional instruments! I learnt classical piano, Eileen and Lear both had singing and tap dancing lessons, and Christi trombone lessons. With the inspiration of our Dad’s whacky musical instrument collection and encouragement we all picked up extra instruments later on.

What is it about you guys and your live shows do you think that audiences find so appealing? There is a great relaxed dynamic that comes with being related to (nearly) everyone in your band, and from that can stem lots of funny stories and jokes at each other’s expense. We always have fun on stage, and I think that comes through.

Is there a song that is requested more times than most? (Loved Christi singing Before the Deluge, superb!)

Where do you see yourselves in 5 years? To be honest it is very hard to look that far into the future as a band. We do have to plan ahead, but about two years keeps it realistic. Next up will be a single launch tour before we record our new album for release in 2016. Canada, the US and Europe are all in our sights. We will always strive to write new and exciting material, play bigger and better shows and tour to new places meeting new people along the way.