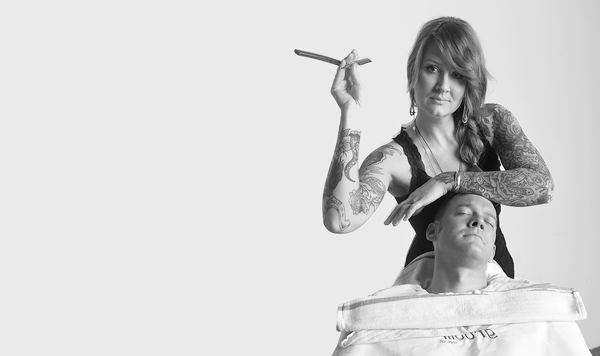 I am an educator for American Crew, International AllStar, which gives me the opportunity to travel as a platform artist all over the US and Canada as a Men’s Grooming Expert. I have been affiliated with American Crew in mulitlple capacities since 2007.

My passion for shaving has been alive and well since early 2004 when I began my start as a licensed BarberStylist at Groom for Men in Milwaukee, WI. After Milwaukee, I traveled to the South Pacific and West Coast to further my passion of barbering. In Tucson, AZ I owned and operated a barbershop & private barber college, Dapper Grooming Lounge, till 2010 when I returned back to WI. I have spent a great deal of my professional career focusing not only on Men’s grooming but also Skincare & Straight Razor Shaving Techniques. I am absolutely passionate about Straight Razor Shaving and throughly enjoy sharing the knowledge I have with others.

Earlier this year, on a working trip to Europe I noticed first hand that the trends across the pond were far different than what we are experiencing in the US. The main difference being the beard growing phenomenon! Many men in the US have defiantly embraced, grown and transformed their entire image by growing a massive beard. Personally, I am an advocate for all things facial hair related so the beard growing trend, beard grooming trend and now the inevitable beard shaving trend are completely fine by me!

As I watched a recent commercial during a sport game, Kevin Spacey actually called out this same trend on an ‘E*TRADE’ advertisement, for which he called out this trend as hitting critical mass. Which I can defiantly agree completely with. This trend I am ready to see move onward! With the hopes that full clean faced gents seek out the professional services of Barber Stylists all over the country and world. As the fact remains that men are embracing the grooming rituals of a different era, their grand-dads era. The grooming uptick in recent years has sparked some very interesting styles and rehash of generations gone by. Right now is an exciting time to be doing hair as there are many nods to previous looks and styles all rolled into a tailored and fitting look for you or your client. But looking at the visage of the clients is what I am most interested in, yes those glorious soon to be beard-free faces!

• Ask your client his grooming ritual… you might be surprised what he is doing or not to his skin on a daily basis.

• Assess his growth pattern… I have found that most guys that experience razor burn are shaving against the grain! Which only worsens this condition!! Teach him to shave with the grain.

• Buying all the products and gadgetry in the world will not work if you are not effectively using it. Work those products in! And always start with a fresh or cleaned blade.

• Moisturize with and SPF after your regimen! Protect that skin and it will look great, feel comfortable and most importantly you can avoid sun damage!