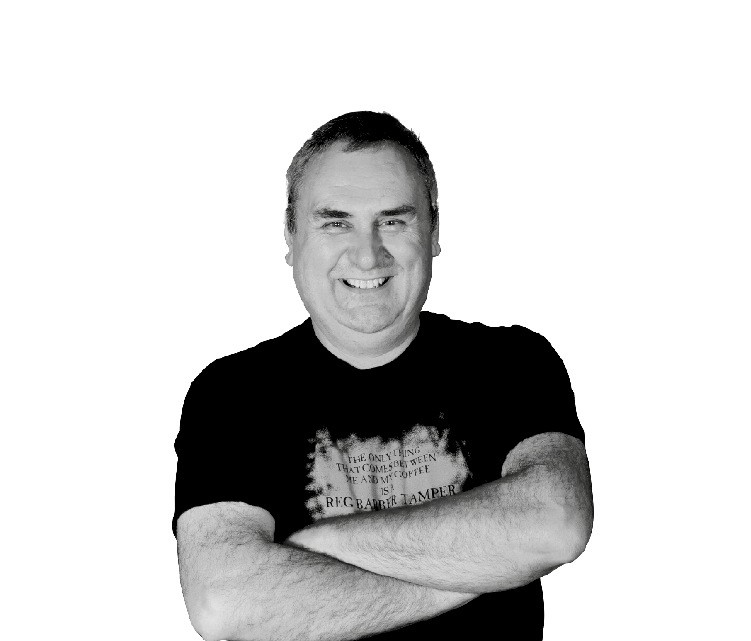 The Cutthroat Journal is looking at The Skills and Trades of the“Man, highlighting the tradition behind their chosen crafts.

Reg Barber is a man well known in the world coffee industry for taking the coffee tamping tool and turning it into a must have piece of equipment for the modern day barista. Like all industries, men need their tools to complete the job right and to the highest quality of that task, and we asked Reg Barber, who started his career as a saw mill worker, how he became the tamper man. We interviewed Reg whilst he visited Jimbo’s Barbershop back in November last year. Reg got to sit in Jimbo’s chair and restyle his mane before his long journey back to Vancover Island in Canada.

“When I started Reg Barber Enterprises, there weren’t many tampers on the market; there were only plastic tampers and turned aluminum solid tampers. They were all under sized and didn’t fit the portafilters properly. However, this made sense, as the tamper wasn’t an integral part of the coffee making process back then – unlike today. It was merely an extra step, and the tamper didn’t take on much responsibility.

My hope when I started in 1995 was to change this. I started simple, making flat bases out of aluminum with wood handles which, to be honest, didn’t really fit the portafilters either. I knew I wanted something better, and I realised there was a need for bases made with a more substantial material, so I introduced stainless steel and specifically sized them – most were 58 mm.

To pair with these bases, I made several handle types to fit different sized hands and to meet the baristas’ various tastes. The Short Tamper was my first handle, made out of either Maple or Bubinga wood. I then made the Tall, Tall Ball, Short Ball and later the Radical Pro out of not only numerous types of wood, but out of aluminum that could be powder coated and anodised in different colours. My Midori Tamper, a size between the Short and Tall Tamper, is actually named after a barista from Japan. We spent time sizing the tamper out perfectly for her hand, and then I kept it as an option for everyone. The tamper handles evolved rapidly after I started experimenting with the stainless steel base.  Not only did baristas request different shapes and colours for the handles, but custom engravings took on popularity as well. I started to feel quite connected to the coffee culture and the baristas themselves.

The tamper bases took a prominent shift early on in my coffee tamper career, when David Schomer began to make tampers out of aluminum specifically for a better extraction. He produced the first base with a US curve (a slight curve on the bottom of the base) and from there, I saw the idea of the coffee tamper begin to change. Not only were baristas customising their tamper with their preferred handle and base, but now the bases were designed to improve the espresso.

The tamper gained even more popularity when the first World Barista Championship was held in Monte Carlo in 2000. The barista competitors used their customised handles and specifically chosen bases to wow everyone with their coffee creations. Here, I saw the tamper take on more responsibility and become a key step in the extraction process. Tampers weren’t just a weight for the coffee grounds anymore, but personal gear for the barista that truly had an effect on the taste and look of the espresso. This new wave of understanding took over.

This tamping knowledge continued to spread worldwide, and so in 2003 I received my own CNC lathe to keep up with this explosion. The lathe opened up the opportunity to make my own bases and specifically size them to fit perfectly in an espresso machine’s portafilter, or within a tenth of a millimetre according to the Reg Guarantee! The lathe also allowed me to make my own aluminum handles. Thus, the true experimenting began. I started with the flat, US curve, and the Euro curve base, as seen already in the coffee community. However in 2004, I invented the C-Flat base, a blend of the Euro curve and the flat. The ripple line came shortly after, including the invention of the C-Ripple, US Ripple, Euro Ripple and the Flat Ripple base. The idea behind this was to make a larger diameter portafilter by artificially creating more surface area. This would allow the coffee grounds to be ground finer while maintaining an excellent extraction and therefore making the coffee sweeter. The base experimenting was definitely a focus, but on the side, I also tried using glass, caste resin, exotic woods, and laminations as handle material.

The next evolution was the Clicker Tamper, which gave you a noticeable click when the pressure on the coffee grounds reached 30 pounds. Even though this is a good training tool for new baristas, it forces the grind to be the only variable in the extraction. After the barista becomes familiar with the process, he or she then could begin to influence a variety of different variables to produce his or her own extraction. Using a regular tamper, the pressure on the grounds, the base shape, and the coffee grind all took on a role that baristas were able to control. This connection and control the baristas developed with the coffee was the best thing the evolving tamper did for the coffee community.

I have watched the coffee tamper evolve over the years and with a constantly changing coffee industry still today, it seems like the tamper’s potential is endless.  If there’s something a barista needs or wants in a tamper, I will do my best to provide the perfect tamper for them. The excitement and the experimenting never stops. The tamper has come a long way, and it’s amazing to see the role it takes on today. I don’t know what the next evolution might be, but I do know that the feeling I get seeing a barista excited and happy to make an exquisite coffee with my tamper is one like no other. Today, the tamper is a crucial tool, a personal mark, and a piece of the barista’s character and coffee making style. I would never have imagined that the coffee tamper would take on such an influential role, and all I can say is that I feel incredibly fortunate to be a part of it. “