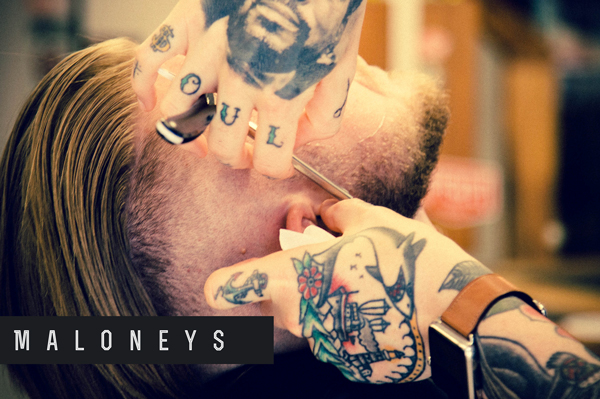 Ask any barber what they love about their work and they’ll likely mention the hordes of interesting blokes who’ve sat in their chair or worked by their side over the years.  Where else can a judge and an ex-con sit side by side on equal terms and share a laugh and a story?

For Julian Maloney of Maloney’s Barber Shop, the first colourful character was also his first boss in his first barbering job in a tiny village in the South of England.

James learnt barbering while in prison for an undisclosed crime, and sported gold chains, prison tattoos and a broad Birmingham accent that  he tried to disguise through elocution lessons.

James was the first of many characters Julian’s met in his years of barbering, and you know your shop would be a dull old place without them.

Now celebrating 30 years in the hair industry, the clients at Maloney’s range from gangly schoolkids to wrinkly grandpas and everything in between.

“It’s the personalities, banter and stories that make my job great” says Julian.

The shop –  in central Auckland – has grown from two chairs to cover three levels, with 11 chairs and a dozen-strong team, since Julian and his wife Susannah opened the doors back in 2003.

“Growing to this size means we have an eclectic bunch of barbers, all with a passion for barbering and their own conversational special subjects” says Julian.  “We also each have our strengths and shortfalls in barbering skills, so we’re lucky to be able to share and learn from each other all the time.”

As well as the informal learning that comes from watching your workmates every day, there are training sessions after work twice a month, with team members coming up with what to cover and who’s going to teach and who’s going to take part.  It could be new techniques to learn, or older ones to refine.  They also work with barbers from other local, NZ and international shops.

“We think the client is king, and this means every visit should be consistently good, no matter which barber looks after you” adds Julian.  Another way Maloney’s achieves this is by supporting the apprenticeship system and the National Certificate in Barbering, both overseen by HITO (Hairdressing Industry Training Organisation).  Julian sits on the board, so yeah he’s a little biased but he really believes industry standards will lift barbering to the next level as a profession.

Everyone on his team has either achieved, or is working towards, the National Certificate, which can be gained via apprenticeship, or Qualification by Experience for those with a few years of cutting under their belt.

In the end, though, it all comes back to the people.   “It’s the characters we meet along the way who shape us as barbers” says Julian.  “Our job is to make them look and feel good, what a privilege!  Do that and you’re a great barber.”

Previous post The Rise of Catfish and the Bottlemen