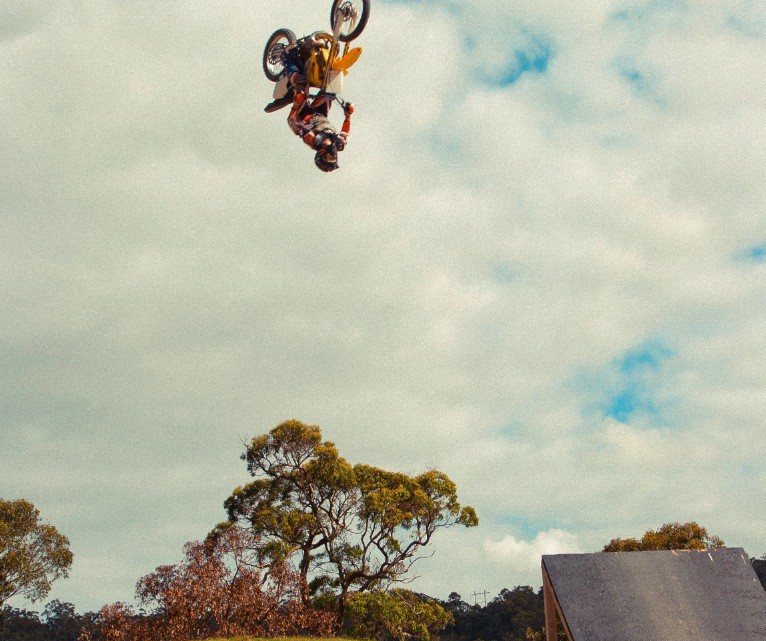 Riding a motocross bike off a massive ramp and flying it into the sky and flipping and then trying to land on another ramp is totally normal right? If you’re a crazy person that is. We talked to one such crazy dude, Luke Cole, about his time riding Freestyle Motocross (FMX)

Were you always a daredevil?

I always had that nature to push things to the limit. Even from a toddler mum has told me stories of just running to the deep end of the pool and jumping off, sinking to the bottom and having to be dragged to the surface, only to do it again 10 mins later. But right through my childhood I was always pushing the limits. It didn’t matter if I was jumping out of trees into the river or surfing big waves, I always wanted to be going bigger and further than anyone else.

Did you grow up riding motorbikes?

Yeah, my dad bought me our first bike when I was 7. My parents never really had much money so I never got a new bike, or even a near new bike. I always had bikes that were held together with fencing wire and duct tape. We lived on 25 acres in Dubbo, so we had plenty of room to build tracks and have heaps of fun.

How did you get started in Freestyle Motocross  (FMX)?

I kind of just fell into it really. I ruptured my ear drum surfing when I was in my early 20s and I couldn’t surf for 18months. I decided to buy myself a dirt bike again. I raced for a little while,  but just local club days. I was really slow and not very good. But what I did know is that I liked hitting the bigger jumps.

I found a jump in the bush near my house and started to ride it whenever I could. The sport of FMX was in it infancy, with it only just getting started in Australia. I watched the videos and looked at the magazines and would go out and try what I saw. I did my first contest in Melbourne in 2000 and it all went from there.

How did you get to the point of being able to jump those big jumps and learn those crazy-arse tricks?

I’ve had that question a lot throughout my career. People would talk to me after contests and demos and say ‘you guys are stupid!’ but learning FMX is the same as learning anything else, you start small and get bigger and more difficult. I didn’t go out on my first day and automatically do a backflip. I started on small jumps and easy tricks. Then the jumps got bigger and bigger, and the tricks got harder and harder.

The backflip is a pretty average trick in your sport these days, how’d you learn to do that? Were you shitting yourself the first time you tried it?

The back flip was a trick that kicked my butt for a few years. I first tried it when there were only a few guys in the world doing them. I pretty much put some hay down on a downramp and tried to flip off it. I landed on my head 3 times and broke my collar bone on the 4th jump. I went on to have a varying degree of success in the next 2 years. I crashed 20-30 flips and only landed a handful. It took its toll on me, mentally and physically. I didn’t try it again for a few years. Then I finally got my head around it and nailed it. Was I shitting myself the first time I tried it? Yep!! And the 2nd time and 3rd time and 103rd time. I never got to a point where I wasn’t nervous about doing my first one for the day.

Describe the feeling you have when you’re performing a jump?

That’s a tough feeling to describe. When you first start, it’s a very physical sensation. You enjoy flying through the air, feeling weightless. It feels amazing. But all that kind of fades away. I still got a kick out of riding, but it was more a sense of accomplishment when I did a trick really well, or I learnt a new trick.

How long did you do it?

How many injuries – what were they?

I was pretty lucky really. A lot of guys I rode with have ended up with long term issues and injuries they will carry with them forever. Although I’ve had my fair share of injuries, I rarely feel them on a daily basis.

The trick I loved doing was called a ‘double nac’. It entailed you pushing the bike out in one direction and your body going out the other direction as you’re doing a handstand on your handlebars. It probably wasn’t my hardest trick, but one I enjoyed doing.

What made you stop?

I just lost the love for it. I got busy having a family and working a ‘normal’ job. So time to practice was pretty hard to come by. When I did get out to practice I got frustrated because I felt like I was riding badly. So once the joy left it was harder and harder to get out and practice. I had a crash where I popped a few ribs off my sternum and I remember laying In the dirt thinking ‘oh im done with this shit!’ and that was pretty much it..

Would you do it again now?

I have only gone out and ridden FMX once since I threw it in. It was a ride day for a a guy I know who died attempting to break the long distance record. All the boys were there and I got excited and went out and had a crack again.

I’m actually just about to head up to the Gold Coast for a 10 year awards night for the team I used to ride for, JC Epidemic. I’ve also opened my mouth and found myself saying I’ll go and ride with some of the boys again. I guess we will see how that goes.

Your brother Matt rode with you too didn’t he?

Yeah he did. We both started at about the same time. It was really good having a riding partner. We are both pretty competitive and would push each other a lot. About half way through our careers, we took different paths. Matt went and lived in the states and China and Europe, and I stayed home and chased the Aussie scene because I had a family.

We came to blows a few times over stupid things, as all brothers do, but I loved riding with him.

How did your mum cope with two of her sons doing such a dangerous sport?

Yeah mum went through the ringer with us doing this sport. She had countless phones calls from random guys at all hours of the day and night saying ‘Matt/Luke has had a crash. They’re ok, but they are on their way to the hospital’. There were a few phone calls when the news wasn’t as good. Mum was very very happy the day that each of us decided to stop riding professionally.

I want to say a huge thanks to Beau and Sheridan at Oakley eye wear for their support over the last 12 years. So stoked to be part of the Oakley family.

Luke Cole, The Cutthroat Journal thanks you for your time and awesome stories!