Lord of the Barber Championships 2015 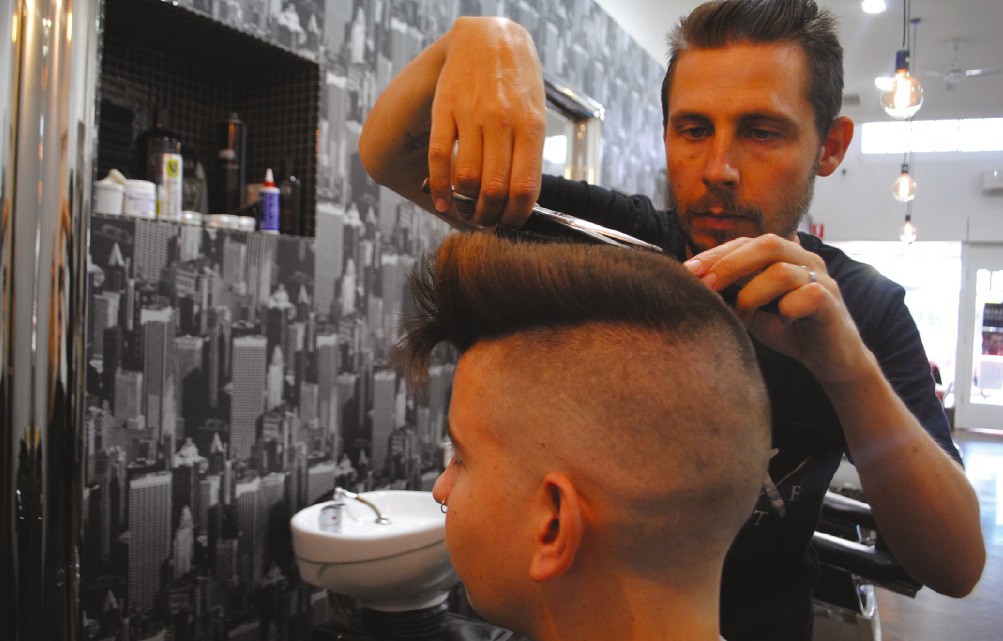 I could go on and on about drummer jokes like – What do you call a guy that hangs around with musicians? A drummer. Or – What does a drummer use for contraception? His personality. But I won’t, I promise. Instead, let’s talk about this brother of the blade, Jay Braslin, and his awesome double life as a drummer in a rockin band called The Lazys.

Jay started his hairdressing trade at 16 in Hobart. As Jay pointed out, at that stage, barbering wasn’t really an option, as it seemed to be a dying trade. He had visions of sipping soy lattes all day and fitting in a few haircuts here and there. His apprenticeship came as a shock, when he had to work his butt off. But he was always much more interested in cutting his mates’ hair than women’s. After completing his trade and moving to Melbourne, Jay fell in love with the barbering scene there and set to work to brush up on his barbering skills, which he said took him a good year.

These days, when he’s not touring as a drummer with his band The Lazys (we’ll get to them), he can be found at Urban Man barbershop in Hawthorne, Victoria. Urban Man launched about three and a half years ago and has just recently opened a second shop in Brunswick. In a sign of the barber times, the shop has grown incredibly busy in just a relatively short time.

It’s a job that Jay never grows tired of. He is constantly inspired by the art of barbering and gets major satisfaction at the completion of each cut. Without the support of his bosses at Urban Man, Jerry and Dave, Jay says he wouldn’t be able to juggle his double life. He’s grateful that he gets to indulge in both his passion for barbering and his passion for music. He continues to work his butt off to prove to Jerry and Dave that he is worth having around. Never letting his standards drop and helping to run training programs for new employees are just part of what he does to prove that worth, along with maintaining his relationships with his loyal clientele, who love coming in and hearing the stories of his recent music tour. Jay loves it too; the camaraderie of barbering is a thrill for him. Strangers becoming mates after a few visits; it never gets old.

When I spoke to Jay, he was just a few weeks away from heading to Canada to tour with The Lazys, a good old Oz rock band. Oh and their single, Shake It Like You Mean It (which is such a sick song!) was in the number 22 spot on the Canadian rock charts. An awesome achievement – and well deserved. These guys are actually really good.

Jay has been rocking on the drums since he was a wee 10 year old boy and hasn’t stopped tapping anything and everything since (hopefully in time … C’mon, it was wide open!) Jay joined the band six years ago when the other band he was playing in did a gig with the Lazys and the drummer from the Lazys was leaving, so they all had some beers and then somehow by the end of the night, he was their new drummer. Got it?

These guys are doing it the old fashioned way and are headed for another massive year of touring, slogging it out for weeks on the road, both in Australia and overseas. They’ve played with some great Aussie bands, including The Angels, The Screaming Jets and The Snowdroppers.

Last year, the band released their self-titled debut album through Pheremone Records. It’s been picked up by heaps of Canadian radio stations. Just as a side note, it apparently hit number two on the Toronto (that’s Canada, not Australia’s Toronto “Tronna”) CBS rock charts just below this other band called AC/DC. The album has also been released in Australia through Sony ATV, and triple M have added it to their playlists.

This guy obviously loves not only having his cake, but also eating it. And good on him! Jay says he loves nothing better than coming home after a long tour and heading to the barbershop to get stuck into it and hang out with his mates again. Kudos to Dave and Jerry for their belief in Jay and for giving him the opportunity to live out his dreams in the barbershop and on the road. But he obviously deserves it! Rock on, buddy.