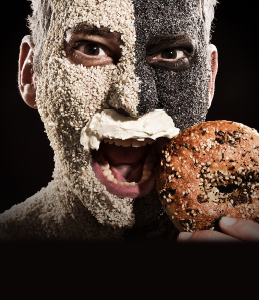 More than bread rolls with holes.

A man has to eat, and even better if he chow down on something that will hold him for a good while.

T hey can’t be stopped. The international march of the New York’s finest bready necessity has continued with bagels taking over Australia – in the country and in the cities men are hankering for something more than just bread. They want something sustaining that’s doughy, dense and delicious. They want bagels.

Prep matters
Teenager Chuck Edwards, owner/operator of Baos & Bagels, says his favourite food stands (ahem) apart because of its preparation. Most recipes involve some variation of the dough being mixed, the bagel formed, proofed overnight, briefly boiled and finally baked.

In the cities
Perth’s Uncle Joe’s Mess Hall are renowned for their piggy-in-the-middle cola pulled pork bagel (publisher Sean still raves about it) Brisbane’s Scout does a mean aioli, rocket and cucumber with provolone and an eight-hour slow-cooked beef brisket bagel.

Melbourne has serious game, and history, when it comes to the humble bagel. The Balleau brothers have innovated a favourite from New York’s Lower East Side by consistently serving up chunky helpings of corned beef and pastrami in the style of the famous Katz’s Deli, while less than a kilometre away the recently opened Mile End serves up Montreal-style bagels. These have a larger hole than New York’s finest and end up tasting slightly sweet after being dipped in honey water and cooked in a wood-fired oven.

Growth
That demand has seen Edwards open a bagel factory in the NSW mid north coast town of Port Macquarie. He can produce 10,000 bagels per week and currently supplies businesses from Newcastle to the Queensland border, a distance of some 700 km. It’s a huge challenge for one so young, yet Edwards is on a mission. “The bottom line is people love eating bagels because they’re delicious, they fill you up like nothing else, so why shouldn’t everyone be eating them?”