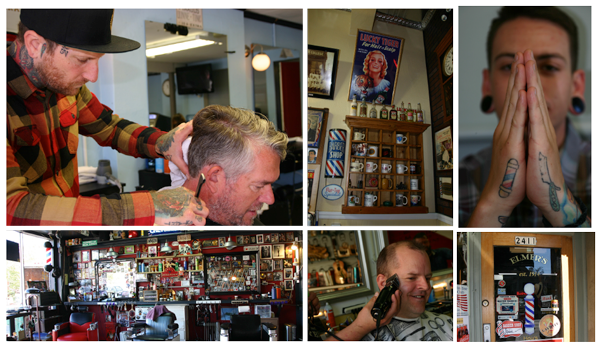 Having just spent six months this year travelling the globe I stumbled upon a very cool pocket of Barbershops in Portland Oregon and was interested on how this North Western part of the USA fostered this cool group of professional Barbers.

Portland is also one of the most vibrant American cities we have called into on our travels and one of the best quotes I took in was “Portland is a place where young people can go to retire”. This is not true for the many young Barbers who are creating some great trendy shops in this fun city.

Barbershops all have their own identity and character but like so many trendy businesses they also need to attach a high skill level to the business as well as a quality level that will give the business the required reputation. The shops we visited in Portland all had ticked the right boxes and had the line up of waiting punters to sanction their successful models.

We started our Barber journey calling into Portland’s oldest Barbershop called Elmer’s on Broadway, which has been there since 1914 and been continuously run by a string of great Barber legends. The current owner is one of these legends, KC has stepped back into the business after a few years break from running a busy inner city shop which he sold a few years back and had a well deserved break. The scissors have called him back to the chair and many of his regulars have come back for his traditional skills and friendships.

Next visit was Rooks Barbers where I jumped in the seat with Justin the owner for a quick trim. I met Justin a few years back when he and many other great Portland Barbers worked at Modern Man Barbers. Justin explain when Modern man changed its business position (closing) many of the young cool barbers went out on their own direction hence the fact Portland has so many cool shops now. Justin is about to open his third store and was a great inspiration to chat with about the direction of the modern American Barber concept and the topic of what is traditional barbering?

We had a good visit in the vibrant Alberta Street district with Adam and Patrick from Dillinger’s Barbershop. This shop was small but steeped in tradition and these guys were passionate about their tonsorial trade. The location is in a very cool part of Portland and you don’t have to stumble too far for good hospitality of coffee, beer or great street food.

We visited another suburban shop out at Milwaukie just South of the City. Anvil Barbers were making some pretty big noise in the barbering world and they have created a shrine to barbers with the largest collection of barber paraphernalia I have ever seen. The shop has every inch covered with cools stuff from old barbering tools to great posters from all era’s. Ryan takes his barbering very serious and he and his team have a good following. The shop had a very old school American feel right down to the Southern accents and Hill Billy music.

Throne Barbers is one of the new kids on the block in the cool Pearl district of Portland. Many of the barbers at Throne are ex – Modern Man heritage. Co owner Robert runs the front desk and his main job is to keep everyone happily lubricated with a whiskey or a beer. They have lots of chairs so the shop is always busy and the day I was there they were doing a whole party of groomsman for a wedding. The shop was very vibrant with lots of good male banter being tossed around.

One of my fav finds was Brick and Mortar which we reviewed before in a previous edition. Mikey and his team are super dedicated to the craft and have a large following. Most Barber shops are appointments only in the States and Mikey has always got a long queue of punters waiting for him to get that personal styling. He has helped many young Barbers get established and is very well known around Portland as one of the creators of change and a good go to for advice.

Last Barbers visited was the chain called Bishops Barbers with 16 locations and still counting. Owner Leo Rivera has done very well getting multiple businesses set up and the name out there and has now stores outside of Oregon state. Bishops have great systems in place and offer great consistent service from shop to shop and have been the makers of change for a long time and the customer service is super friendly, which I believe is a vital ingredient in successful barber stores.

I enjoyed getting out there hitting the streets of Portland talking to so many different barbers all shouting the message of keeping this great trade alive and fun. I cant wait to go back next summer and see what new chess pieces are on the board in weird old Portland.