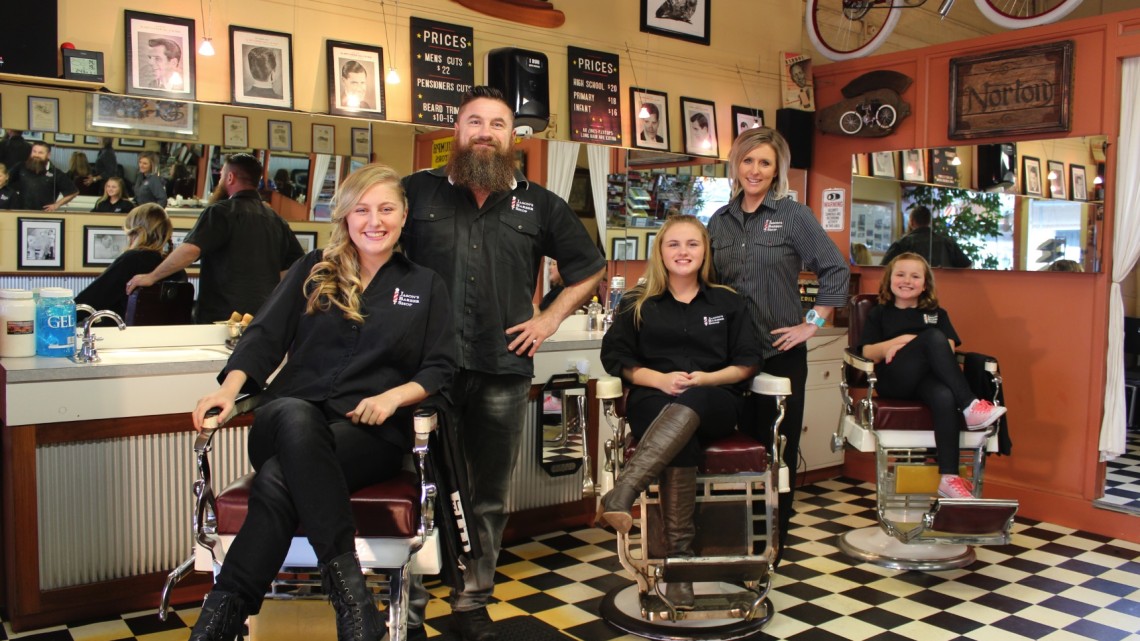 Jasons Barber Shop and Beardry, the oldest Barbershop in Australia… perhaps. (Is your barbershop older than Jasons? Let us know if it is! TCJ)  The history of this barbershop dates back over 120 years, with a history of trade documented in Goulburn. On the back wall of the barbershop is a photographic timeline starting from 1895.

During the 120 years of trade, only four barbers have owned the barbershop. The barbershop was constructed between two old buildings, in what used to be a lane way for horse drawn carts. Old signage can be seen still hand painted upon the walls of the laneway above the shop – Bushells Tea and Sunlight soap. Beautiful and ornate but unfortunately fading day by day.  A cosy little shop, but large compared to barbershops of today.

In it’s heyday it was running 5 cutting chairs and a dentist chair. A very traditional barbershop, everything from shaving to pulling teeth!

The outbreak of WW 1 shook things up a bit.  Many young men would have visited it for their enrolments for the army and before being deployed overseas, maybe never to return?

Eric Mansfield took over the shop and barbered on for the next 42 years, through the Great Depression. A difficult time, and a testament of the resilience of the barbershop throughout WW2 and into the 1960’s. Eric retired and passed the business onto George Kalenterios, a Greek immigrant that had been barbering on a wood box as a young boy since he was 14 in Greece.

George, well known to Jason, the current barber, spoke of the hard times that started to plague barbering. The Beatle’s haircuts of the 1960’s came in and the barbers started to get shunned by the younger generation.

Then there was the  Vietnam War, hippies and long hair,  the barber starvers of the 60’s and 70’s.  Next came the era of men going to ladies hairdressers of the 80’s, long hair, perms and highlights.  No wonder the barbershops suffered.

George retired due to ill health and sold the barbershop to Jason in 1991.

Jason Perry, the current barber, started his apprenticeship after finishing high school at the age of 15. Now 44 years old, he has 29 unbroken years of hairdressing experience under his belt. A master barber for sure!

As a young apprentice in the 1980’s, Jason travelled by train over 200kms a day, six days a week. All for a weekly wage of $99. $75 a week was taken up by train ticket expenses alone!  Jason will admit it was a hard slog in the early days, but he had the dream of one day opening his own shop always in the back of his mind.

The barbershop he owns today still displays the trophies that he won as “Apprentice of the Year” back in the early days of his training.

When he finished his apprenticeship, Jason set his eyes on the old barbershop where he grew up in Goulburn.  At 20 years old, it was a daunting proposition, but now after almost 25 years of business, he’s never looked back.

The shop is a rare traditional barbershop, one that time forgot!  Set out spaciously with the cabinets and walls adorned with old barbering artefacts.

Customers travel for miles to be immersed into an atmosphere and service of a barbershop.  Something that has always existed, but was sadly been passed by for too many years.

Jason loves barbering, particularly the part where he has the chance to bullshit all day.

He has customers travelling a long way for his famous freehand flattops. That’s right folks. Freehand flattops.  Plus, he’s got heaps of car and motorcycle stuff in the shop. He loves the stuff!

If you’re heading to Goulburn, make sure you drop in and visit Jason’s shop, steeped in history and tradition. You’ll get to have a great yarn, learn more about the shop’s history, heck out all the cool motorcycle and car paraphernalia.

And who knows, you may just walk out of there, head held high, with the most epic freehand flattop you’ve ever dreamed of.