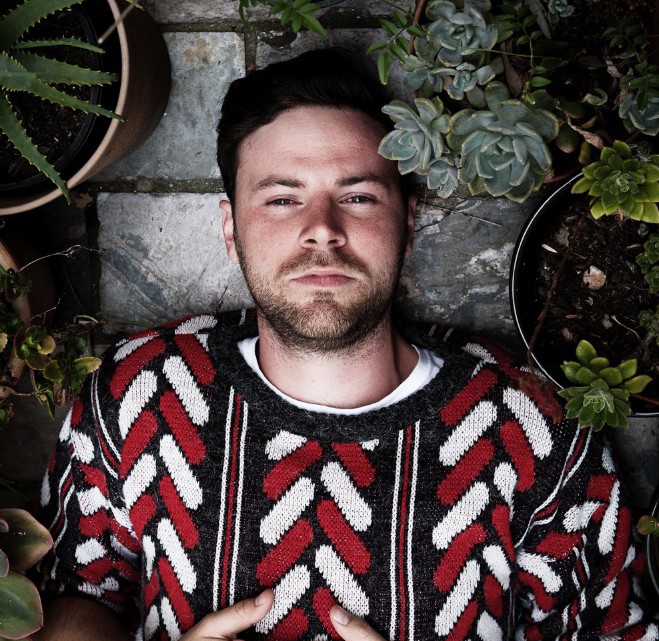 Three things we noticed straight up about Jack Carty: He really rocks a great grandpa jumper, he loves lying down next to plants and getting photos taken, and his last name could be the subject of rhyming mockery – if you were that way inclined and possibly somewhat immature. Now we only write this knowing that Jack has a great sense of humour.

Which he does. After seeing the way he handled a granny fan and all her crotch loving comments to him at a recent gig, there’s no doubt this dude’s funny. But enough about crotches and nature and last names rhyming with farty, this Jack Carty is one seriously amazing muso. Here’s some stuff he had to say when we caught up with him recently.

Did you grow up in a musical family? Were you always musical?
I think so…Mum reckons she found me singing the melody to a children’s song called “Inch Worm” before I could speak. I grew up in a semimusical family. Mum plays a bit of guitar and dad has a naturally good voice, but neither of them are trained musicians. I am the eldest of four, and only two of us really sing or play instruments.

Describe your best career highlights to date. There have been quite a few moments and days that stand out. Showcasing at SXSW is one, as was touring with some of my high school hero’s like Josh Pyke, Justin Townes-Earle and Katie Noonan…Playing Woodford Folk Festival is right up there too, we used to go there as a family when I was a kid.

How many roads must a man walk down before they call him a man? None, who cares what they say anyway?

How would you describe your musical style? Lyrical, melodic indie-folk in the storytelling tradition.

If you weren’t a musician, what would you be doing? I’d be a history professor… with a beard, a pipe, a tweed jacket. The whole shebang.

You have recently released ‘Esk’ – describe the style and mood, what should we expect? What does the title mean? It covers a fair range of ground, I think you’ll have to hear it. But it’s generally a bigger sound than my previous albums and definitely my most ambitious release yet. There is a song on there set around/named after the “Esk” river in Northern Tasmania, I liked that “esk” isn’t too prescriptive a word, but still seems to have some sort of connotation for most people.

Do you get nervous about performing? Not as a general rule… Mostly I just feel excited and grateful.

How many weeks a year do you spend touring? I have no idea… I had no fixed address for three years, so that felt like one big tour. These days I have a home base, but i’m still out on the road more often than not.

Best and worst part of touring?
The best part is seeing new places, sharing music, meeting other like-minded people who love it like I do, and the feeling that I’m doing what I am meant to be doing. The worst part is the lack of sleep.

Worst gig ever? Let’s just say it involved a small-town and a racist venue owner.

Best gig ever? They are all beautiful in their own way. I can’t remember distinct details about as much of the past three years as I should… which is a bit of a worry. But I’ve found that the high’s are so high, and the lows are so low in touring that you’ve got to learn how to keep an even keel about it all, be grateful and keep rolling.

What’s your dream venue to play? The Bowery Ballroom in New York City. I’ve seen a bunch of amazing bands there, would love to play it myself some day.

How many instruments do you play? That depends on what you qualify as “play”? Let’s just say 4: Guitar, Drums, Bass & Piano.

What’s playing on your ipod at the moment? The new Conor Oberst album “Upside Down Mountain”… Nobody writes lyrics like that guy.

If you had to record a Christmas carol, which one would it be? Silent Night.

What’s your position on faical hair? What’s your fiance’s? I am all for facial hair! I’ve got a beard more often than not, though that is as much about an aversion to shaving as it is about appearance. My fiancé tends to be onboard the beard-train whilst I am sporting one, but once I shave there’s often some sort of comment like “Oh, I like seeing your face”.

Do you/ have you ever visited a barber? Do you have a local barber? I have and I do! I’ve just moved to Brisbane and am still finding my way around a bit, but I went to Bare Bones in Morningside whilst on tour a few years ago and I thought they were ace.

Previous post Adding an important tool into your business