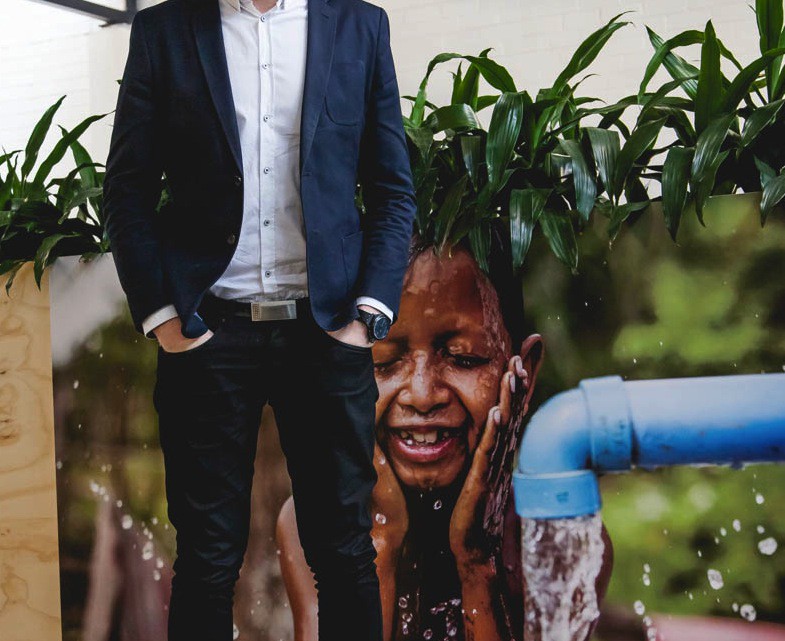 It was when Daniel Flynn was 18 years old and attending university that the idea for Thankyou Water was first born.

Set on pursuing a career in the business world, Daniel’s life took a different turn as he listened to the following statistics and heard of heartbreaking stories: 900 million people in the world without access to water, at the same time Australians are spending $600 million dollars a year on bottled water. He was quite taken aback by the strong emotional response he had on hearing about the water crisis facing so many people in the world. One particular story affected him: a young boy in Africa, who travelled all day to collect water for his family. The water though, was contaminated, and so was actually slowly killing them.

Daniel and a group of friends who were also passionate about this cause decided to take action. Bottled water was their answer. People buy bottled water all the time. With Daniel and his team’s idea, they could buy water with a conscience. The idea? To manufacture bottled water to sell in cafés and supermarkets, where all profits went to fund projects in developing countries. BRILLIANT.

With everything set in place and with sales and progress already being made, Thankyou came up with another BRILLIANT idea. A social media campaign, which comprised of a video explaining the idea. It was asking people to pledge that they would buy Thankyou products, which by now included a Thankyou food and Thankyou body range, if they were stocked in Australia’s two biggest supermarket chains, Coles and Woolworths. The response: overwhelming. 15.5 million views later, the dream became a reality. Both Coles and Woolworths agreed to stock Thankyou products, including water, muesli Bars, hand wash and moisturiser, to name just a few.

So how does it all work? We can do our part as a consumer by simply replacing existing products that we buy with Thankyou brands. Then, after manufacturing and staff costs are covered, all of the profit goes directly to programmes on the ground in 14 developing countries in South East Asia, Sub Sahara and Africa. Thankyou doesn’t set up their own programmes; instead, they fund projects presented to them by humanitarian organisations, or project parters, already in the field, such as Care Australia and Oxfam. Such a smart lad this Daniel, hey?!

Depending on the day, Daniel says the degree of satisfaction in this work changes. “Sometimes it’s like – wow, look what we’ve achieved already. But other days it feels like we have such a long way to go,” he says. “In the first year we made a total profit of $7,500, and we were so discouraged. Since then we’ve continued to grow in profit each year. To date, we’ve contributed over $2 million dollars to projects.”

Daniel is married and his wife, Justine, is one of the fellow founding members of Thankyou. Working together and being married can be a tough gig, but Daniel says he and Justine have had to learn to switch off when they leave the office. “We’ve become extremely good at not talking about work at home, because we’ve had to.”

There’s not many young men of Daniel’s age who would devote themselves so entirely and selflessly to helping others as he does. “There are probably three main reasons why I do what I do. One, because I’ve had these arresting moments in my life where I’ve witnessed other people in extreme poverty. Two, is because of my Christian faith; this is a huge part of my own journey, of giving to others as I believe I’m called to do. And three is my vision – keep working; the bigger we go, the bigger impact we can make.”

How many times have you sat and watched an ad for an aid organisation, seeing a sick, hungry, vulnerable child and wanted to help, but then forgotten? No blame game here; so many of us are in the same boat. It’s so easy in our comfortable existence to forget about the millions in need. Thank God for people like Daniel, who follow the calling of helping the needy. The fantastic part of Thankyou though, is it is so simple for all of us to contribute to the cause. We would be buying these products anyway; by buying Thankyou products we can choose to contribute … To live every day, give everyday, as the Thankyou motto goes.

Daniel and the team at Thankyou are continuing to work to be bigger and better. They were a team of eight just 18 months ago, and now that number has grown to just over 30 people. There is a top secret new range of products on the horizon which, according to Daniel, will be a big bold move and will take their number of products to nearly 50 in total.

“The point of that,” says Daniel, “is that the more retail sales ability we have, the more people we can help.”