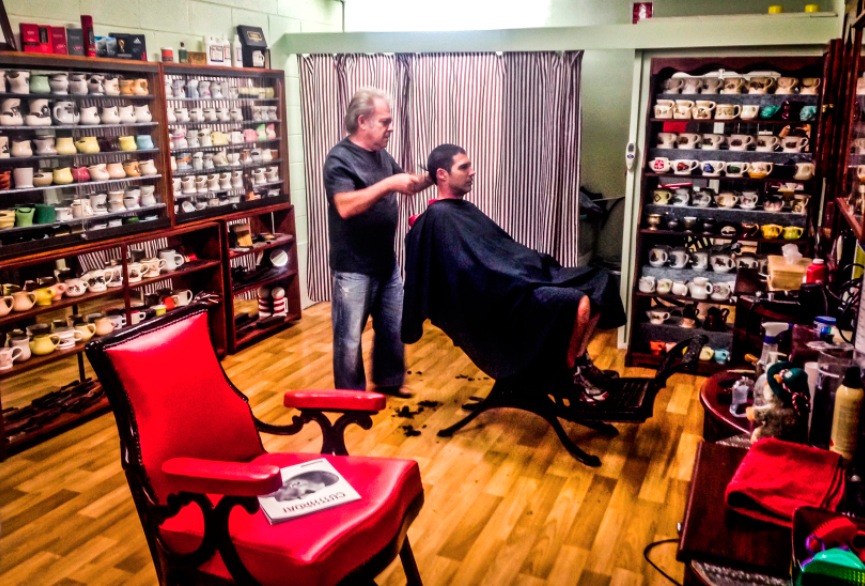 I was not expecting to find this amazing museum dedicated to barbering in Townsville, Queensland on a recent family holiday. I stumbled by chance across barber Franz Linzmayer and his magnificent collection of cutthroat razors and shaving mugs.

Bygone Barbershop is very traditional and the layout is old school. He has renovated two red antique barber chairs, which look as new as they would have been when first purchased over 120 years ago.

Franz has been cutting hair for 54 years. He started when he was just 14 years old. Coming from a long tradition of barbering, he knew this was his calling. The German-born Barber is a purist and believes there is no place in the industry for diverse style barber shops, as in, he believes barbers are barbers and hairdressers are hairdressers.

When people go to Bygone Barber they can check out his collection of over 350 shaving mugs, 100 brushes and 100 plus cutthroat razors. Franz has been collecting for a long time and the items are displayed proudly around his workspace. The shaving mugs are quite rare and date back to the 1800’s.

Franz has had an interesting career and has worked throughout the world, spending a large part of his life in Africa.  He has also worked with many celebrities, including Liberace and Rock Hudson.

We got onto the subject of the beard craze, which is very popular among the young mining boys in North Queensland and he rattled off some historical facts, ‘When Alexander the Great sent his men to the battle he asked all of them to shave all of their beards off. This was because when the enemies came along with the horses, they would rip each other’s beards and pull them down,’ Franz explained.

Franz loves the North Queensland lifestyle and made it his home after checking out many places in the world to settle. Townsville is lucky to have such an iconic barber in its company. Franz is great for a chat and listening to his life stories is a treat on its own.