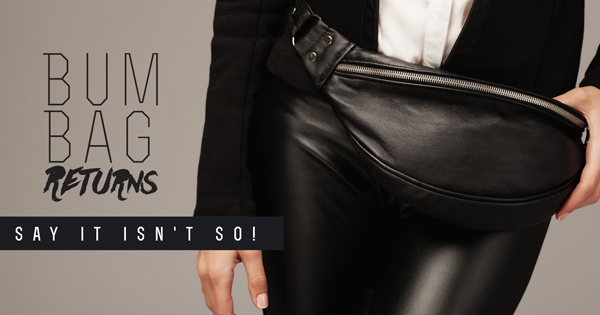 A fashion trend that I had long forgotten from the 80’s and 90’s, synonymously associated these days with the UK lad culture that spilled into the social and economically challenged, style hoarders raiding Vinnies bins for brand name throw outs.

The humble Bum Bag is back! Now I don’t know about you but many trends that rear their most ugly heads I avoid like a Thursday trip to the supermarket and this one for me will prove no different.

But for the sake of a story I am about to embark on the history of the Bum Bag, Fanny Pack or in Haute Couture circles – the Belt bag.

It’s been said the Bum Bag was originated in Australia by a designer trying to replicate the pouch of a Kangaroo but history channel shows me it was used by the American Indians in the form of a rope pouch from Buffalo Hide, Frozen Iceman have been found with pouches with necessities, in Ancient Carvings in Egypt and even in the bible Judas was known as the “Purse carrier”.

The ease of opening the Crutch Wallet with a Zipper or Velcro means its proven popular for Gunslingers alike as a holster for those carrying handguns. Military, police and Paramedics use Fanny Packs to carry additional equipment, such as first aid, night vision, markers, etc

The name “Fanny Pack” came from the bags being used in a rear facing position above the buttocks commonly known in the US as the Fanny (Yes I still giggle every time I hear that word) but due to being a pick pocketers dream they are now faced towards the front.

The “waist wallet” generates pictures in our minds of tourists in too revealing Lycra tights and polyester fluorescent colour tracksuits but these days is being found on Fashion Catwalks all over the world.

The Rock himself shared a snap on his public Instagram “When I took this iconic absurdity of a picture in 1996 I was one year removed from sleeping on a used mattress I took from a garbage dumpster in the back of an hourly sex motel.

“Couldn’t afford to buy a bed so we do what we gotta do to get by. He continued: “You can imagine all the fun, colourful bodily fluids I tried my best to clean off.”

“21 years later I’m taking the same photo backstage hosting Saturday Night Live for the fifth time. He did note during an appearance on Jimmy Kimmel Live his Bum Bag was full of Condoms and Poptarts.

With the resurgence of the “Waist Bag” by designers on the catwalks across the world they have shown up in photos of celebrities that were obviously too young to realize the social faux pas. Just because its adorned with a label people does not make this fashion trend “cool” youngins.

Even tough it appears the Humble Bum Bag is back and used for more than secrets deals in back streets, and fashion challenged tourists to hold local currencies, passports and maybe your chewing gum, it’s not a trend I will be taking back on in a hurry.