Bring back the mullet. 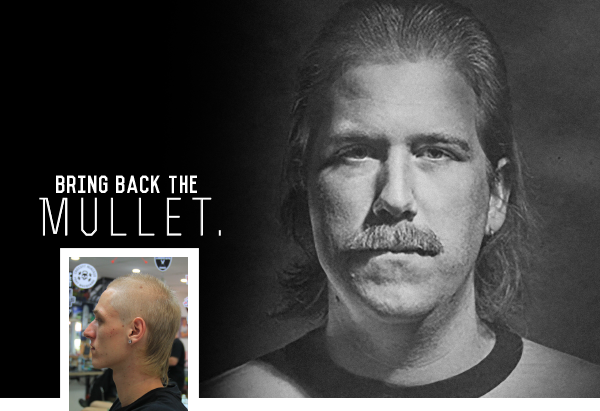 The unmistakable – or should I say the unforgivable – mullet is still around, I am afraid to say! This cut was the favourite of our lovable Bogan, whom you still see sporting it around in the far western suburbs of our cities and in outback areas of Australia. The traditional Mullet was a regular cut from the front with a straight fringe, but from the back it was a mane of long, unruly hair.

Billy Ray Cyrus was one of the best mullet wearers in his time, and we also had our Aussie iconic actor Mel Gibson bring it back into fashion with his epic movie, Braveheart.

The biggest collection of mullets I’ve seen was at an ACDC concert in Melbourne, where I felt naked with my groomed appearance. Nothing quite sets off a flanno like a good mullet! The mullet was famous with our rock stars of the eighties, where if you had the hair, you would wear one. The mullet even become popular with the ladies like Suzi Quatro, who took it to another level of fashion … Even our lovable Mrs Brady from The Brady Bunch had a well-groomed, fashionable mullet.

Sports people also took to the mullet – guys like AFL players Warrick Capper and Stephen Kernahan.  Andrea Agassi was probably the most prolithic mullet debonair, as he bounced around the centre court, flicking his mullet at the crowd.

The mullet was one of the demises of the barber of the eighties, where most mullet wearers took up a long and loving relationship with the hairdresser. She knew the art of long hair and how to upkeep the mane of glory at its peak. The barber was not going to play around with this new cut, as the barber was the place of the short haircut and your normal barber had one choice only – and that was the clipper blade size.

We believe from good sources that the mullet may be coming back. We have studied websites like “The Plague of the Mullet” and social media sites like “Aussie Mullet Hunters” to confirm our prediction. Even the reliable website Wikipedia has a full page dedicated to the mullet.

Our Editor, Jimbo, has agreed to use his shop to photo shoot and assist styling the man with the mullet. Please sit back and make your own opinion of whether this fashion stays or should be buried with fads like flares, platform shoes for men and Brut aftershave.