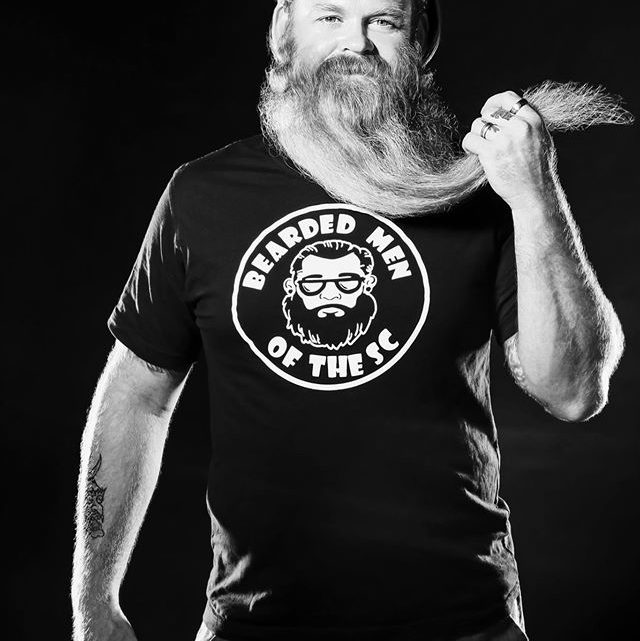 In 2007, he said his ‘I do’ with a small goatee upon his chin. Little did he know about 5 years later he would have a full beard that had people stopping him in the street to comment.

And, that it would be the start of his Beard Club in 2013. Nathen Coles has been growing his beard for almost 10 years. There was a point in his growth that his mates started to ask him when he was going to shave and “what was with the beard?” It was then that he realised none of his friends around him had facial hair and it began to make him feel like an odd one out. So, with social media becoming more of a platform for connecting with people, his wife suggested they start a beard group for him to find some hairy friends locally. Bearded Men of the Sunshine Coast was established.

A few months after starting on Facebook and inviting friends and family to join, it got some attention and he landed himself and wife, Greta, on the front page of the Sunshine Coast Daily. Page likes spiked over night and the momentum hasn’t stopped for the past six years. The club has become an incorporated association and have a thriving member base that attend the regular club meets. They are now known as Bearded Men of the Sunshine Coast Inc. or BMOTSC as they affectionately refer to it. Nathen is President, Greta Coles is Secretary and one of the longest standing members Jason Sizeland is the Treasurer.

Jason also owns The Barbers Shed stores in three locations on the Sunshine Coast. The club has a massive network of local businesses and services they support that are intertwined with the Beard Club culture. They are regularly asked for grooming tips and beard care product recommendations. Over the years Nathen and the club have been fortunate enough to use many different brands of beard balms, oils, washes, brushes and love talking about them amongst the facial hair community. Grooming is a massive part of looking after your facial hair and Nathen is no stranger to it with his beard coming in at 45cm in length. There are some excellent brands that have sponsored the club and have kept them looking sharp for all the competition stages they take to.

This year they held their 6th Annual Beard & Moustache Competition. This type of event generally attracts hundreds of spectators and on average 50 competitors across seven categories – Moustache, Partial Beard, Whiskerina (female creative faux beard), Full Beard 0-10cm, 10-20cm, over 20cm and Freestyle which is the creative styled beard. The club also had members attend seven Competitions from Gympie, Qld down to Ballarat in Victoria. Some of these comps have been hosted by the club at events in the community including The Barbers Expo, Oktoberfest On The Coast and Beef & Beers Festival. They have raised thousands of dollars over the years for non-profit organisations including Rosie’s; Friends on the Streets, Headspace, Movember Foundation, Heartkids and This is a Conversation Starter.

But, it’s not only local and interstate competitions that their club members have attended. In 2017, Nathen travelled to the World Beard & Moustache Championships in Austin, Texas. He was amongst over a dozen Australians and placed 13th out of 31 in his category of 30-45cm. BMOTSC is proud to have the highest ranked Australian in their club. Donna Coles took out second place in the Whiskerina Creative Moustache category. A title she will defend at the 2021 Championships in New Zealand. The club is in the early planning stages to get as many members over there to compete. If you would like to get involved with BMOTSC or know someone with some epic facial hair, you can find us on the following platforms: