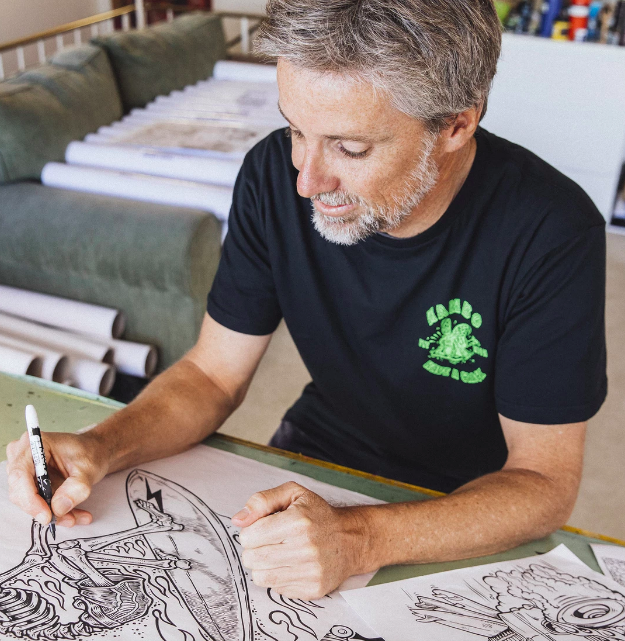 Hey Ben, how’s it going? Please tell us a bit about yourself and what you do.

I am a freelance illustrator and designer residing in Sydney, I love demented visual art, surfing, movies and loud rock music. I am married and have two teenage boys.

What music do you listen to in the studio?

I played in hardcore punk bands as a young fella and I am partial to any loud rock music – ranging from 70’s legends like Alice Cooper and the Faces – to 80’s punk lords like Black Flag and the Hard Ons – through to contemporary legends like Queens of the Stone Age and The Raconteurs – and everything in between. Also, when I work in the studio I love to listen to movie soundtracks composed by geniuses such as Danny Elfman, Bernard Hermann and Hans Zimmer – they tend to transport you into a different mindset.

What was it like growing up in the skate/punk scene of the northern beaches?

It was great fun.  The mid-eighties through to the 2000’s were our wild times and we spent a lot of time in the city and inner west as well – all over the city really. Neither punk rock (and ‘indie’ music in general) or skateboard culture were popular or mainstream and we were part of a relatively small mob that moved around within our various subcultures and had many and varied friends.  There were no smart phones and public transport was terrible, so we were a dedicated bunch. I think people tend to romanticise the past a bit, but our wild times were probably not much different than many other generations before and since, it was just a lot smaller, very DIY and ignored by mainstream media and culture.

How has the skate/punk scene influenced your artmaking?

I was always influenced by the imagery that accompanied skate and punk rock stuff – it is shocking, iconic, sarcastic and fun. I also love that the imagery draws heavily on pop culture, comics and horror movies. I think if you look at my work there is an obvious connection with those essential trashy elements. For me it is all about fun and shocking conservative minds.

Describe your process and mediums you use?

I worked in screen printing factories after I finished school and I have always loved posters, so my work evolved using a lot of line work and flat colours and half tones that represent screen printing and that pulp style printing of comics. I have always used pen, brush and ink, and colouring the work digitally on a computer. However, in recent times I have started using ‘tablets’ to draw on – both Wacom and iPad, I am not afraid to use new technologies as they become available and it can really enhance your work.

Your work is super bold and sometimes confronting what is the idea behind making famous people half dead?

The stripped back faces of famous people came from an exhibition I did about five years ago. I was working with really iconic images that you could recognise no matter how much I ripped the flesh off them and turned them in to zombies. Images like Uncle Sam, the Queen and Bugs Bunny. It kind of just evolved to famous pop culture figures – rock stars, movie stars etc. It doesn’t always work, they have to be very recognizable people for it to be understood. There is no idea or meaning behind it other than it looks rad.

Your work uses a lot of pop culture; can you talk us through this?

I spent way too much time watching television as a kid and I love films and contemporary music and all the junk in general that we are force fed by media every day, this is in a sense the REAL art of the masses. I don’t really like the elitist cerebral and pretentious art world of the top end of town. The greatest art of the twentieth century was probably Bugs Bunny cartoons and the Sex Pistols first record – bright loud fun that appealed to millions of people over a long period of time. Pop culture is around us all day every day. (I then like to f*@k with it and turn it in to something else again)

What are some highlights of your career to date?

I’m not sure, you are only as good as your last drawing I guess, but I do love rock posters so doing beautiful screen printed posters for Nirvana, Queens of the Stone Age, You am I, the Pixies, Cosmic Psychos and Pearl Jam (among tons of others) is something I love to do.

You have a real signature style do you have any desire of going in another direction?

It’s not really a conscious thing, I would like to try other things for sure. I guess my style is also a product of being a working artist, people hire you to work in that style, so it is what people see of your work. I like sketching in a book and drawing landscapes of the coast and the harbour around where I live and would like to paint more in different styles too. You just have to make the time to do those things, but it is very enjoyable.

Being such an influential legend in the illustration world what would you say to young aspiring artists about making it in the industry?

Just to be yourself, and love what you do. Developing a look or style that appeals to other people and yourself will come naturally if you are working on things you love and enjoy.

Thanks for the chat!

Next post Pleasure in the job, puts perfection in the work...