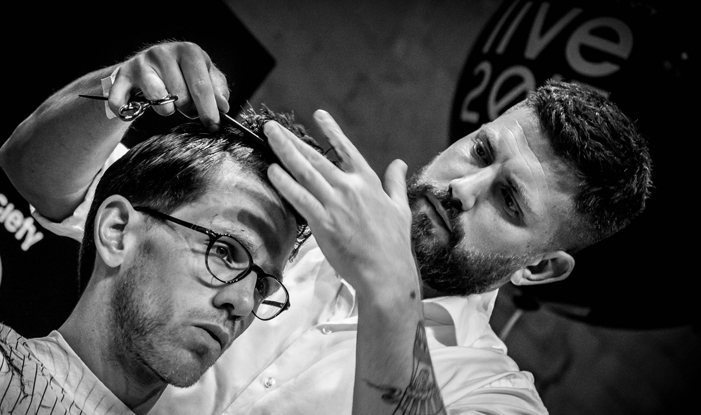 BarberSociety Live has, after two successful editions, emerged as the leading event for barbers and is now a permanent fixture of the European barber scene! The third edition of BarberSociety Live will take place in April 2018 at the Westergasfabriek complex in Amsterdam and is set to be bigger than ever. This is because a second day has been added to the event to give everybody who is interested in the cool world of barbering the opportunity to experience BarberSociety Live. So this year clients and friends of barber shops, hair dressers, students, etc. will be welcome as well.

This year’s BarberSociety Live programme also boasts not one but two battles: a BARBERSOCIETY BATTLE for national and international barbers and a BARBERSOCIETY YOUNG TALENT BATTLE in collaboration with hairdressing and barbering colleges. The BSL People’s Choice Barbershop Award – powered by 1922 by J.M. Keune will be presented at the event. The winner of the title of best Barbershop of the Netherlands will also be revealed at BarberSociety Live. The largest barber event in the Benelux will take place on Sunday, 15 April (barbers-only) and Monday, 16 April (general admittance) in ‘Zuiveringshal West’ at the Westergasfabriek complex in Amsterdam.

‘We’re looking forward to the 2018 edition that will bring together barbers from across Europe. It’s going to be a unique event featuring stunning shows by national and international barbering talents, great music, beer and fun! I’m delighted that even more people will be able to experience the unique world of barbering on the second day of the event. We’ve got a brilliant line-up of national and international barbering talents for both the first and second day of BarberSociety Live. It’s only possible to put on such a world-class event thanks to the participation of our sponsors 1922 by J.M. Keune, Wahl and American Crew, who supported us from the start. So I’d like to thank them very much for their support!’

While the complete programme will be announced soon on the website, it’s already certain that this third edition will boast even more shows by top barbering talents from around the world. Belgium’s Kevin Boon, who was named the world’s best barber at the International Barber Awards (IBA) 2017, and American Instagram icon Mikey Henger will take to the stage. Dutchman Ronald de Bont, owner of businesses including ‘De Zwarte Raaf barbershop’ in Groningen, will give a show in his role as National Ambassador of sponsor 1922 by J.M. Keune. Sponsor American Crew will also present its vision at the event.

Event participants can, for an additional fee, attend workshops provided by educator Sid Sottung of the Sid Sottung Academy, a shaving workshop by Italy’s Scapicchio Barber Shop, operated by one of the world’s oldest barbering family, which will demonstrate the finer points of the art of the shaving. And last but not least, Mikey Henger will be giving a ‘How to build your brand’ class.

The Best Barbershop of the Netherlands will also be named at the event as part of the BSL People’s Choice BarberShop Award 2018 in collaboration with 1922 by J.M. Keune and review platform WieWatHem.nl.

This year’s event will feature not one but two battles made possible by American Crew:

Barbers from the Netherlands and abroad will battle it out to prove their skill and creativity and to win a chance of winning the title: BarberSociety Winner of the Year 2018.

They must compete in three categories:

Who can cut the sharpest fade in 15 minutes?

Who can make the coolest old-school haircut using a comb, scissors and razor blade?

Who can make the most creative and original freestyle haircut?

The winners will take home cash prizes and product packages made possible by sponsors American Crew, Wahl, Tondeo and others.

A national competition for hairdressing and barbering college students that gives them the opportunity to show off their barbering skills. These young talents will battle it out in the ‘Old-school scissor cut’ and ‘Freestyle – total look’ categories to determine who will take home the title of: BarberSociety Young Talent Winner of the Year 2018!

This is a not-to-be-missed event for everyone who is interested in the world of barbering! It features the best barbering talents, inspiring shows presenting the latest trends, interesting seminars, demonstrations and stands showcasing lifestyle brands and the best and latest barbering-related products and tools. It is a unique experience.