BARBERSHOP THE NEXT CUT 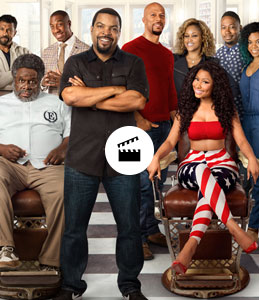 The fourth film in the Barbershop series is a lesson in franchising. Simply put, The Next Cut was going to be a success regardless of whether it was any good.

It comes down to groundwork. Barbershop opened in 2002 and introduced us to the motley crew at Calvin’s (Ice Cube’s) barbershop on Chicago’s south side, who must save the business using their swift wits, faster mouths and hearts of gold. It’s so safe a formula that the producers have trotted it out three times since, making profits with such surety even the ill advised Beauty Shop spinoff in 2005 banked a tidy $13 million.

In the new film we’re back on the south side, reunited with characters we fell in love with more than a decade ago. There’s Cube playing Calvin and Cedric the Entertainer as the cussing old Eddie, while Eve reprises her role as the only female barber Terri. The story is no mystery of great invention, so if we’re being honest we’re here for the beautiful visuals of Calvin’s barbershop and the hilarious characters within.

There are new characters, but their details don’t matter to the film’s success as much as the names playing them. Nicky Minaj, Common and some punk called Tyga all star this time, beefing up the hip hop credentials established in the original.

Hip hop, and having consistent genre big names, gives the series its anchor, its authenticity and its success. The genuine article is all that matters in the worlds of the barbershop and hip hop, and the series’ producers recognised that long ago. It’s why it doesn’t matter if the fourth film is any good: it just has to be real.