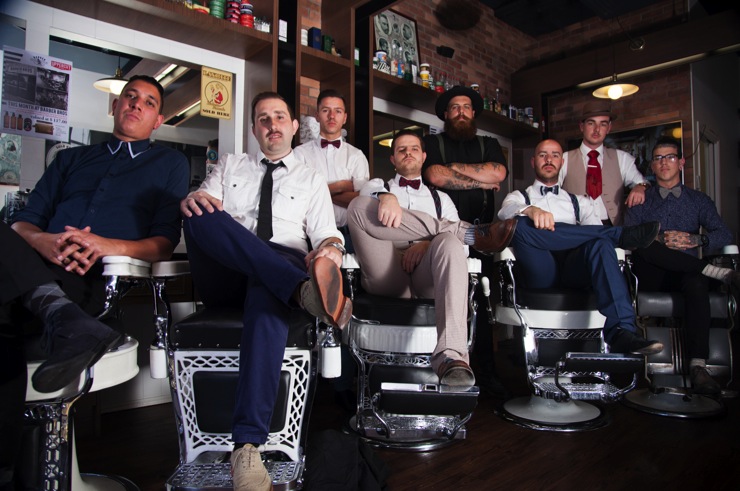 Barbers around Australia have been quietly rallying to become ambassadors of the latest product to take the barbering world by storm; Reuzel.

With a cult like following, the founders of Reuzel – The Schorem Barbers of Rotterdam – have established themselves as a household name amongst the barbering community.

Well known for their men-only barbershop, Haarsnijder en Barbier, Scumbag barbers Leen and Bertus are preserving the vanishing craft of barbering. In their mission to preserve the traditional barbering art form, the duo is passing on their knowledge and passion through the wonderful world of social media and their new barbering academy in the heart of Rotterdam.

With the simple question “are you Australia’s biggest scumbag?” put to Australian barbers, Haircare Australia have been overwhelmed with the number of barbers entering the competition. Video entries showcased the barbers’ passion for conserving this craft, each with a unique spin and fresh perspective. After lengthy consideration, Denis and Alen from Barber Bros & Co on the Gold Coast and Sean Palmer of Uncle Joe’s in Perth were to be donned the worthy ambassadors of Reuzel Australia and the tickets were booked to attend the Schorem Academy in Rotterdam.

With Alen and Denis having an impressive 20 years of barbering experience between them, it’s no wonder they reaped such success with their Barber Bros & Co venture. Opening its doors in December 2013, Baber Bros & Co is carefully based on the Schorem ethos, providing patrons with an experience that boasts a warm, friendly feeling, oozing in old-school charm. With some 400 clients coming through the doors each week, Barber Bros & Co goes to every length to ensure a masculine atmosphere with attention to every tiny detail of the barbering experience. From barber chairs dating back to 1907, a 100-year-old cash register to the vintage timber and exposed brick, authenticity exudes.

With such an innate respect for barbering, inspired by the greats, Alen and Denis take the time to educate their patrons about the bygone era of traditional barbering. But, most importantly provide patrons with what they describe as the most ruthless, rag haircuts and hot towel shaves. Of the sound opinion that barbering is not about fashion, but instead about style and tradition, they base their careers on respecting the barbering heritage and the products like Reuzel that so perfectly compliment it.

Starting his barbering career in 2007, Sean Palmer has spent the best part of it working alongside some of the world’s most experienced barbers, especially during his time in the UK. Joining the Uncle Joe’s team not long after its opening in 2013, Sean has seen the shop develop into a barbering experience worthy of the curiosity and popularity it now receives. Not just your average barbershop, Uncle Joe’s offers it’s grooming facilities to punters from all walks of life; mixed with the fresh vibes from the men’s clothing store and café attached. In keeping with barbershop tradition, Uncle Joe’s features recycled materials that perfectly compliment the 100-year-old chairs and traditional barbering tools and products on display.

Sean’s passion is kept alive by the barbering industry’s ability to constantly challenge and open the mind. He recognises that there is always room to learn and new styles and techniques are always needed, provide fresh cuts and shaves that make his clients feel like a boss is his ultimate mission. Having trained in a traditional barbershop dating back to the 1930’s, Sean has a keen eye for the finesse of men’s grooming, hoping to bring the old-school techniques to the surface for today’s barbershop dwellers.

With such dedication to the barbering profession and respect for Schorem and the Reuzel brand, there really are no better barbers for the job. Each recognises the Reuzel ethos and base their careers on preserving the very tradition that Reuzel is trying to preserve. The trio will start their official duties as Ambassadors next year, kicking things off with a once in a life time trip to Rotterdam to train with the Scumbags themselves. Schorem Barbering courses hosted by these new ambassadors will be rolled out across the country in 2015. Visit haircareaust.com for more information.