A Close Shave in India 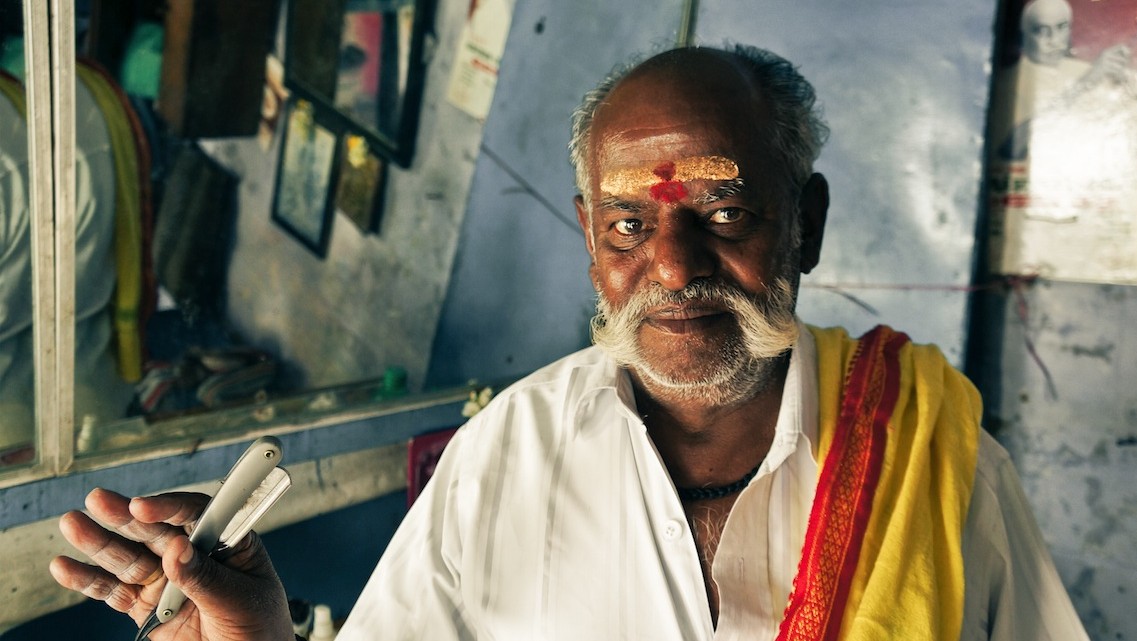 I was on Coffee Business up in the jungles of the Elephant Hills, Southern India, when I had the urge to cleanse two weeks of bush grime from my shaggy scalp. I had passed through an isolated village called Valparai a week before, which was an outpost for itinerant coffee and tea pickers.

I  remember seeing a barbershop located close to the fish and meat market in a colourful tin shanty. My plan was to check out the situation and take a few pictures of the shop and if game enough, have a bit of a trim. On arriving at the barber’s little tin shack, we were met by a crowd of onlookers venturing out of the smelly fish market to see the unusual looking Australian who appeared out of the jungle scrub looking for some deep cleansing. I got some great snaps of the shop and all the proud barber’s tools and after getting permission through my interpreter, I got to sit in the proud barber’s chair for what I thought would be a few quick holiday snaps. I mounted the old leather steed, and within seconds the old wrinkled barber jumped me, threw a cape around me and instantly drew his cutthroat from its leather scabbard. I was too scared to move, as he rubbed the back of his rough fingers over my two-week stubble; he already had evil in his eyes, saying every single bristle needed to be shaved from this white boy. This was the first time in many years I had gone through a full series of travel shots, and my good fortune told me the antibiotics were about to be tested to their full capabilities. Within seconds, the old boy had a dirty old spray bottle and was squirting my face with swamp water and then lathering up my face with an ancient badger brush. To my relief, he fitted a new blade to his cutthroat, as when I looked around the growing crowd of onlookers, there wasn’t a fellow there  I would like to have shared blood with. It turned out the old barber knew his stuff and he did a splendid job on my face, providing several skin conditioning treatments including a powder and a concoction that smelt like liquid tiger balm. I only had a few small nicks, which he rubbed over with a large crystal, which magically sealed the blood flow. It was a funny 15-minute experience, and I paid my 50 rupees for the ride (which was about a dollar). It was going to take a long time at those rates before my old mate would be putting new tin on his shop front. I stepped out of the chair into a cheering crowd, feeling like a glowing teenage boy with a smooth and refreshed face.